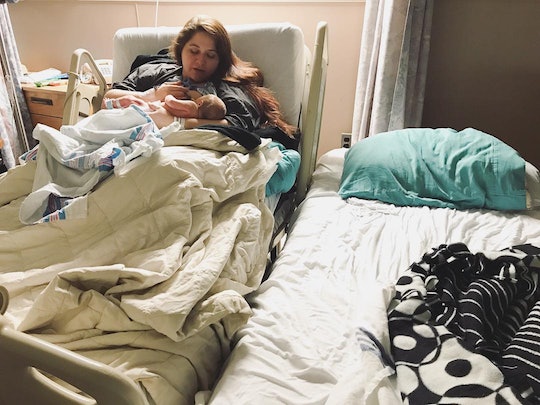 When Your Wife Almost Dies, Do You Still Want To Try For Another Baby?

Dese’Rae has been undergoing fertility treatments since 2017. In January, she welcomed a baby son, carried by her wife. This is the second installment of her Trying diary; read the first here.

I recently went on my first post-birth work trip. I’ve never done something so hard in my life as getting out of the car and kissing them both goodbye that morning. I’m an extremely anxious person, and I struggle with intrusive thoughts. Most of those thoughts are death-related. It used to be suicide that I’d fixate on; now, my thoughts focus on how I or Fel will die, how my mom and grandparents will die, or ways in which I might inadvertently hurt Gus (most frequent: will I slip carrying him down the stairs and drop him?).

Some of this is new-parent thinking, but a lot of it is just the way I’m wired. I travel a lot for work these days. I got it in my head at some point that, because I fly so much, I’m statistically more likely to die in a plane crash. Now Fel has to tell me I’m not going to die before every flight. This usually takes the form of a text that says, “NGD” — not gonna die. It’s a silly thing, but it’s comforting having irrational fears validated as real, true feelings, even if they are irrational.

The only thing that got me through the trip was the playlist I’ve been building for the baby. I'd listen and cry, but it’s filled with songs I want him to know and love. Music has always been my greatest non-human love. This playlist will be, for me, one of the most special ways for us to bond. I sing these songs to him, and maybe one day he’ll remember and carry them with him like I do the ones my grandmother sang to me as a kid.

Still, I was a mess the whole 36 hours I was gone.

I made Fel promise to send pictures. She sent one that ruined me — her blue eyes and the baby in her arms. God, that photo. It brought me back. I chose the perfect human to build a family with. When we’re working as a couple, which is most of the time, we are a shockingly good team. It’s like a well-oiled machine.

Seven hours after Fel's water broke, as we were getting settled in the hospital, labor hit hard and fast. When I say fast, I mean that literally: she wasn't having contractions when I left to get a slice of pizza; when I came back 15 minutes later, she was writhing in pain, and the contractions were already coming a minute apart. A few hours in, she got a fever as a result of an infection in her uterus. She suffered through it, but the baby ended up going into distress twice.

After the second time, when his heart rate skyrocketed, the doctor said she could continue to labor, but that a c-section might be a wiser choice. We opted for the c-section.

But Fel’s fever never went away entirely. It spiked two to three times a day like clockwork. The doctors kept her on a steady stream of antibiotics and painkillers for days without doing much else. They kept telling us we were going be discharged, but the fever would come back, and they’d decide to hold us for another 24 hours. The doctors would check in twice a day, ask some questions, but no one was really looking at Fel. There were no physical examinations, and no one seemed to be interested in figuring out why her temperature kept spiking.

I felt the absence of my person, my best friend, bodily. It wore on me.

The baby was born early Tuesday morning. On Friday night, the flesh on Fel’s belly turned red. I’d lost faith and trust in the doctors at the hospital and their ability to help, so I reached out to a friend who is a doctor. His feedback led us to request multiple consults and, finally, on Saturday morning, a doctor discovered that the incision was deeply infected — so deeply that all of her stitches had to be removed (and without pain meds — I’m pretty sure my wife is some kind of superhero). Because the infection had been neglected for so long, it spread into her blood. It could have killed her.

She spent the next two months healing this giant, open wound. It had to be cleaned and packed by a nurse daily, until she went on the wound VAC (vacuum-assisted closure; it's as bad as it sounds), which sent her into a spiral of despair. Fel suffered an intense trauma. She disappeared inside herself for what felt, to me, like forever.

It was warranted, but it hurt. Fel is the sun around which I orbit. The prospect of her loss was unbearable, and I needed a little more from her, emotionally, than I normally would have. I did my best to keep up with the house, with her needs, with the baby’s needs. This is what I signed up for as the able-bodied partner. But I also needed to feel connected, and in the adjustment period and post-birth recovery, I often felt the opposite.

We have different love languages. I thrive on physical and verbal affection. Fel prefers giving and receiving a more practical proof of love — a home-cooked dinner, or household chores. I gave everything I could. She said she felt more connected to me than she ever had before those moments, but I felt the absence of my person, my best friend, bodily. It wore on me. And so we struggled.

The conversations we're having now revolve around: What would it mean to only have one child instead of the two we’d always planned on? Now that we’ve experienced the fourth trimester, how worried should we be about my mental health if I carry, knowing that I’m predisposed to postpartum depression? What if I become suicidal again? What are the financial pros and cons of having one child versus two? Would Gus suffer without a sibling? What if I can’t balance it all? What if I ignore Gus in favor of the second child by virtue of a baby being needier than a toddler? I love being Gus's mom. What if I ruin this perfect thing we have?

Every time Dr. Glassner inserts a catheter into my uterus for an IUI, I envision sperm meeting egg. The same goes with IVF, but the stakes are higher — there’s a higher likelihood of it working. One embryo with a handful of cells is released into my uterus. It’s already fertilized. Most of the work is done. All it needs is to be healthy, and to stick to my uterine lining. Every time we try, I dream up lists of names and wonder who my little person will be. I build up hope and a narrative. Every. Single. Time. And every single time, when it all comes crashing down — whether it be a failed cycle or, worse, a miscarriage — it hurts. I don’t know how much more of this I have in me.

In seeing Gus make his grand entrance, I learned why babies are miracles. Their mothers are, too. Birth is a body trauma we expect of women, but we rarely talk about how lucky they are to make it to the other side. I found myself in a state of panic after Gus was born and Fel suffered complications — if we'd lost her, I would have gone mad with grief, and I can’t imagine I would have been functional enough to care for him. I would have had no way to independently take care of us consistently.

I have selfish reasons, too. Fel has recently taken to talking about how her body hurts in ways it never did, how the shape of it has changed, the possibility of a tummy tuck. Her body has changed shapes many times over the years, and she has rarely been phased in a way that seemed distressing from the outside. This is different.

Would the possibility of me not having a baby devastate her like the prospect of her not being able to conceive devastated me?

I'm selfish. I don't want to do that to my body. I already carry so much pain: chronic neck and shoulder pain. I can't imagine adding to it. And I’ve gained so much weight since I started fertility treatments. At first, it was the hormones, but ever since the baby arrived, I’ve been living on a steady diet of Oreos, Stouffer’s Macaroni & Cheese, and, now that it’s that season again, Rita’s. I’ve never been so heavy in my life, which is something, because I’ve always been chubby. Despite that not being the norm marketed to us by the media, I’ve always liked my body. Until now. The specter of more hormones and more weight gain looming in my near future doesn’t really help.

I also had a breast reduction eight years ago, and it changed my life. My back doesn’t hurt the way it used to. I don’t get as many headaches. My breasts don’t run the show anymore. People don’t look at them before they look at my face. I went from a G cup to a D cup; they’re still there, still big, even, but I don’t feel forced to try and be as feminine as the body I inhabit. They allow for a little bit more fluid of a gender expression, which suits me better. They’re perfect. But I don’t know if I can even breastfeed.

I have a million reasons why not right now. What if I can’t even biologically have a kid? What if it’s too late? What if I’m taxing my heart and my brain and my body (and our pocketbook) for something I don’t even know if I can do? The hardest part is that we can never know the answers to half of these questions in advance.

I recently thought, for the first time, “But I love being his mom. Why can’t I do it again?” Still, it’s so hard to see all that good and say, “Well, why not have more of this?”

What I really want to know is how Fel feels. Would the possibility of me not having a baby devastate her like the prospect of her not being able to conceive devastated me? I think something about hearing that she would be deeply upset if I didn't carry might help. One night, she looked at the baby and then looked at me and said, "I want you to have one of these." That’s the closest I’ve gotten.

I just need so badly to know that I want it.

More Like This
Infertility As A Stepmom Means Double The Alienation, But So Much Love
These 4 Sleeping Positions Will Keep You Comfortable After A C-Section
Here's The Best Time To Remove Your C-Section Tape
Can The Way You Sleep Really Turn A Breech Baby?