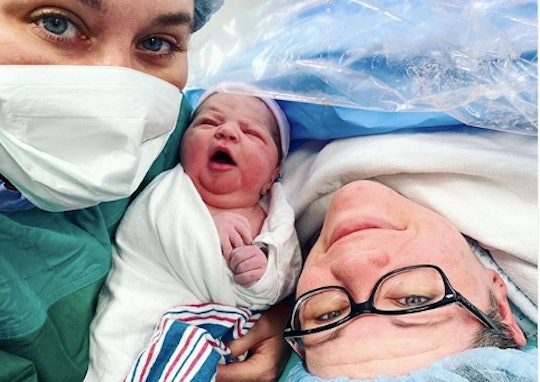 What Queer Families Deserve In The Birthing Room

As parents to be, we recalibrate our expectations for birth constantly — as we get to know the fetus growing on the inside, as we get to know our minds and bodies that evolve with pregnancy, as we get to know and trust (or not) our medical providers. This is probably true for anyone who might be expecting, but the birth experience for queer families can go very right or very wrong. I’ve had both experiences.

Before I talk about birth, I feel like I’ve got to take it back to the beginning — back to early experiences with fertility doctors, when my wife, Fel, and I just thought we needed a little sperm exposure to conceive. Before we learned that we were both infertile.

Something you need to know about us is that we have magical unicorn insurance that covers everything except for the cost of sperm and 20 percent of medication. Rather than trying to do inseminations at home, like many of our less insurance-lucky peers (and like our OB suggested — PRO TIP: never trust an OB with questions of fertility), we decided to take advantage of our good fortune and went straight to a reproductive endocrinologist. Plus, sperm is still damn expensive at $1,000 a vial and we didn't trust ourselves to get the job done.

During our first consultation, we were paired with a doctor finishing up his very last day at the practice. We explained that we wanted to add little humans to our family, that we were interested in each getting a sense of our baseline fertility levels, and that I wanted to carry a child before Fel.

We learned, after the procedure, that “no sex,” in that case, meant no sperm exposure. Given that we were there specifically for sperm exposure, it felt a little silly.

People tend to make assumptions about queer couples based on dated ideas about gender expression. TL;DR: when the doctor saw that I had short hair, he assumed that Fel would be the one to carry our children — as if hair length positively correlates with maternal instinct. It became a problem when he repeatedly refused to make eye contact with me, even after being told that I wanted to be the one to carry. Having your womanhood voided by strangers based on your appearance is humiliating and degrading. When those strangers are medical providers? Unacceptable.

That was strike one.

The administrative staff in charge of prepping patients for procedures seemed to perform their duties by rote, even when faced with a queer couple. One time, they advised us not to have sex before a procedure. We learned, after the procedure, that “no sex,” in that case, meant no sperm exposure. Given that we were there specifically for sperm exposure, it felt a little silly. This happened more than once. They would also confuse us as patients, calling one with results for the other, or forgetting which of us had had a specific procedure.

We were assigned to another doctor for continued care. She was fine until she delivered some difficult information — that Fel had a less than 5 percent chance of conceiving — in the most unceremonious manner possible. It was traumatic.

That was strike three.

When we switched to a new doctor and told him about our prior experience, he was honest with us. He said, "Look, I don’t have much experience with LGBTQ+ families, but I want to help you." He said, "Tell me if I ever make a misstep and I'll correct it."

Every time a new nurse or doctor would come into our room — and they came often because it was a teaching hospital — they would ask where 'Mommy' was.

If staff at the new clinic were ever unsure, they asked questions before making assumptions. When asked what about a specific phase of treatment might require us to avoid sex, they could be very clear about what they meant: sometimes it meant no orgasm; sometimes no sperm exposure; sometimes no foreign bodies near the cervix. It felt a lot like, as a whole staff, they were more informed.

And we felt like part of a team — and after treating this stubborn body of mine for so long, part of a family — rather than just two more cogs in an impersonal baby making machine.

Everything was smooth sailing after that. Until Fel gave birth. The postpartum care we received was awful.

Every time a new nurse or doctor would come into our room — and they came often because it was a teaching hospital — they would ask where “Mommy” was. It always made for an awkward moment when we would both spring to attention at the question, or when, occasionally, I was alone with the baby and had to explain that his birth mother was elsewhere and hi, I was also his mother.

Every new provider presented us with yet another opportunity to give them free training on working with queer families, instead of just, y'know, enjoying our new baby. It would have saved us all from feeling some kinda way if they'd only had the cultural competency which should, honestly, never have been a question in 2018. Alas.

A similar instance: a photographer arrived, uninvited, to hawk her wares. Even after she got the crash course in How Not to Be an Asshole to Queer Families, she remained ignorant. When she reached the parentage blanks in her paperwork, she asked me, "So, you want to be the dad?" I'm not sure how, "Oh my god, are you kidding?" was the only thing to come out of my mouth in reply.

Later that day, I found myself in tears as I tried to fill out the birth certificate. Instead of spaces for Parent 1 and Parent 2, the form was still labeled Mother and Father. Pennsylvania Vital Statistics updated its forms to be gender neutral in 2013. Marriage equality became the law of the land in 2015. It wasn't as if, again, in 2018, we were pioneers.

We spent two weeks in the hospital after Gus was born because Fel was extremely ill. That was a long time to have the same painful conversation over and over.

When I got pregnant, I wasn’t about to put myself through the same thing. We went to a completely different hospital. The lead-up to birth was not super awesome, but the birth itself could not have gone better.

I've kept in contact with one of my operating room nurses and one of my postpartum nurses — that's how much I loved them — so I was able to ask some questions. According to T, the O.R. nurse, "We get a good amount of queer families. Maybe 10 percent ... [The hospital] does an amazing job and educating and teaching us about the healthcare disparities that exist in the LGBT community, and how they relate to family structures and the birthing process. One of your intake questions, for example, includes asking about gender identification and pronouns so we can ensure that we address people the way they prefer."

This was a birth where people cared, and showed that they cared. I felt like a person who was seen and heard. I felt respected. And it all felt effortless. I was able to heal and enjoy my new baby with my wife without having to do unnecessary emotional labor. I think, ultimately, what queer families want is to be treated just like anyone else.

And I don’t think it requires that much more effort.