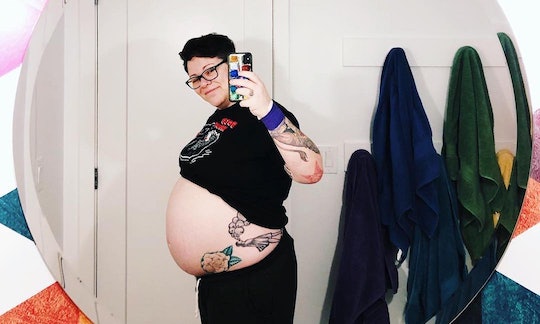 I Was Told I Didn't Want To Have An Elective C-Section... But I Do

Dese’Rae has been undergoing fertility treatments since 2017. In January 2018, she welcomed a son, carried by her wife. This is the eleventh installment of her Trying diary. You can read the previous entry here.

Based on the negative experiences we had with Gus’s birth, I made the decision to deliver Baby 2.0 at a different hospital — the one with the most glowing reviews among our group of friends, and rated the best in the city. I went to just about every appointment with Fel when she was pregnant, so I can confidently say that it’s been a vastly different experience, but I can’t say it’s been better. So far.

The hospital where Fel delivered Gus mainly serves folks who are uninsured or who have Medicaid, with few private insurance clients, whereas the new hospital largely serves private coverage patients who have sought care at a top-ranking hospital. It shows, but not in the ways you might think.

Fel and I both grew up in working-class families. Despite having arrived comfortably in the middle class as working adults, the foundation remains. The birth stories we know best — our own, and for me, my siblings' births, too — are c-section stories. Neither of our mothers breastfed, saving their breasts and bottle-feeding us. It was the '80s. C-sections and formula feeding were more acceptable then; these days, there’s a good amount of stigma around both, and a lot of it smacks of classism.

The juxtaposition of our families' birth experiences and what we see in the media and hear about in the communities around us has been downright confusing.

Fel was, at least, comfortable in the knowledge that she wanted to give birth vaginally, if she could. My own interest in carrying a child never had anything to do with the trip down the birth canal; it had everything to do with feeling a tiny human grow inside me, and subsequently raising them to be awesome. I always just kind of skipped over the birth part; all the fetal removal options sucked, and I figured I’d cross that bridge when I got to it.

And then I got to it.

I’ve often left appointments feeling like what I heard was, 'Your body, your choice — unless your choice is a birth experience outside of our preferences.'

My quest for information and clarity around my options for the birth process has been frustrating, due in large part to my medical team. The hospital Fel delivered at had few issues with medical intervention (ultrasounds, induction, c-sections); the new hospital is less keen on those options. Ultrasounds are minimal, and they won’t recommend an induction or c-section unless your baby measures 11 pounds or more (10 pounds if you’re diagnosed with gestational diabetes). The new hospital has an 11 percent c-section rate. They want you to know that, and they really want you to help keep that rate low (the national Cesarean delivery rate is 32 percent, per the CDC).

But here’s important information that led me to question my options beyond vaginal birth:

I’ve always had an inkling that I would grow a large baby, if I was able to carry, so I started asking questions early, at around 24 weeks. My midwife seemed skeptical of my concerns. She told me that if I was truly concerned about size and it would make me feel better, she could arrange for me to have an early growth scan, and to remind her at my next visit. A growth scan is a lengthy ultrasound where the tech measures various aspects of fetal anatomy, does some math, and tells you how much the baby likely weighs. The first growth scan usually occurs at the 32-week mark in a pregnancy.

When the next visit rolled around at 28 weeks, I reminded the midwife about the growth scan. Again, she seemed skeptical, but when she measured my stomach, the baby was already larger than average. She pushed the growth scan up. Sure enough, 2.0 measured consistently in the 92nd percentile for weight from 28-34 weeks, and then jumped to the 97th percentile at 36 weeks.

Given all this knowledge, it seemed logical (to me) to launch into a line of questioning about a potential elective c-section. The larger the baby, the larger the risk to mother and baby during a vaginal delivery. I’ve read terrible things about shoulder dystocia in babies, issues with women's pelvic floors post-birth — incontinence, and even uterine prolapse. After our harrowing experience bringing Gus into the world, my interest in risk has been minimal. A c-section is major abdominal surgery, and even with the associated risks, it seems like a safer and more controlled environment in which to deliver a large baby (not to mention that the thought of having that little bit of control significantly quells my anxiety).

I’ve left most of my appointments feeling unsupported and frustrated because, beyond explaining that they would never recommend intervention until the baby measured 11 pounds, midwives and doctors alike dodged all my questions. I even had an OB tell me, after my 32-week growth scan, that “more information isn’t necessarily better.”

The troubling thing here is that I sought out this hospital and, specifically, their midwifery practice, because I wanted a more supportive, responsible environment than the one we had at the original hospital.

While the original hospital had few issues with medical interventions, there was a slew of other issues, from catching a nurse stealing Fel’s pain meds to a neglectful attending doctor who, I believe, was responsible for Fel’s health deteriorating to the point it did. And they really struggled with “alternative families.”

Every time a nurse or doctor would come into the room, they would ask where Mommy was. If Fel happened to be elsewhere, I was with the baby, and indicated that I was Mommy, they’d say, “Oh, not you.” Filling out the legal paperwork around the baby’s parentage was disheartening. Instead of spaces for Parent 1 and Parent 2, the form was still labeled Mother and Father (inconsistent with the Pennsylvania Vital Statistics website, which updated its forms to be gender neutral in 2015).

So, upon switching to this new hospital with a midwifery staff beloved especially by other middle-class queer families in our peer group, the experience has been trying. Midwives are known for their belief in bodily autonomy and a woman’s right to choose, but I’ve often left appointments feeling like what I heard was, “Your body, your choice — unless your choice is a birth experience outside of our preferences.”

I was met with white woman after white woman who all cooled at any suggestion that I might be considering options other than vaginal birth.

People of higher socioeconomic status have the class privilege to be more educated about the birth process and have the time and resources to compare not just delivery options, but research related to birthing scenarios with lower "morbidity" outcomes (like how many complications you'll be looking at) and better overall outcomes. They’re in touch with the culture and advocacy around birth that working class women simply don’t often have the resources to consider.

At the same time, it feels like as you gain the privilege of more access and more education, there’s a reversal of values from prioritizing maternal outcomes to prioritizing newborn outcomes (not that, as a society, we were ever too concerned with maternal outcomes): the mother and her needs are less important if they’re not in perfect concomitance with what’s considered the gold standard of birth, no matter what the cost to her mind or body. And this privilege comes with the increased burden of maternal sacrifice, against all odds, for the ideal birth, feeding, and nutrition of a child; developmental milestones; and educational development — along with increased oppression toward and stigma against choices that are Other, made by parents who simply don’t have the time, money, desire, or ability.

I started making appointments with a different midwife each visit to see if I could find a better fit, glean more information, ask questions more comfortably. But I was met with white woman after white woman who all cooled at any suggestion that I might be considering options other than vaginal birth. Even the fact that I wanted an epidural was met with, “Well, you can make that decision later,” as if my decision was incorrect, hasty, and not educated enough.

It feels like as you gain the privilege of more access and more education, there’s a reversal of values from prioritizing maternal outcomes to prioritizing newborn outcomes.

Until I met Michelle, a black midwife — one of very few on staff. When I articulated my fears to her, she encouraged my ability to perform a vaginal birth, but didn’t push it. She said, “I’m here to support you, and we will do whatever makes you most comfortable.”

We talked about my anxiety, my depression, my worries about postpartum depression (PPD), my fears that I may not be able to breastfeed. She said, “Me too.” She told me she’d struggled with PPD and that she couldn’t breastfeed; more importantly, she told me that I would be OK, because she would be there for me every step of the way.

Her honesty and, I’m guessing, her breadth of experiences with a wider swath of humanity than the other midwives, made it clear that I could choose what felt right for me, because what’s right for me could only be right for my baby.

More Like This
A C-Section Actually Doesn't Take As Long As You Think, According To Experts
Can The Way You Sleep Really Turn A Breech Baby?
Here's The Best Time To Remove Your C-Section Tape
These 4 Sleeping Positions Will Keep You Comfortable After A C-Section