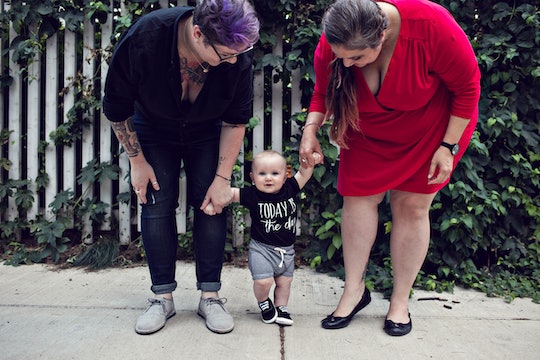 Dese’Rae has been undergoing fertility treatments since 2017. In January, she welcomed a son, carried by her wife. This is the fifth installment of her Trying diary. You can read the previous entry here.

I have to meet with a social worker (also named Desiree) before I can adopt my own kid. She has lots of questions for me — about our families, our income, savings, home, car — but the one that gets me is the one I've been thinking about for months.

“Why do you want to adopt August?” she asks. I knew it was coming, and the only answers I had were variations on the themes of, "BECAUSE HE’S F*CKING MINE," and, "BECAUSE I DESERVE THE SAME DAMN PARENTAL RIGHTS AS ANY OTHER MARRIED COUPLE WHO CONCEIVED TOGETHER."

In the end, Fel answered it for me using a more diplomatic phrasing of the latter. I was too flustered, knowing Gus will be able to access this file when he’s 18. I wanted to word my response perfectly but, ultimately, by that point, he’ll know the whole story and what's in that file won’t matter. It helped that Desiree seemed just as frustrated for us as we felt, and she made it feel at least a little less painful.

So begins another month.

I got my period a day earlier than expected — it was a rough day for parenting, and a rough day for morale, knowing it was go-time for yet another cycle and I wasn't prepared. I decided I'd jump back in the saddle so late in the previous cycle that I didn't have a chance to consult with the doctor about the med protocol in advance. I ordered sperm late, got the med orders in late, and fought with the pharmacy for two weeks. It was chaos.

Since I didn't have a chance to talk to the doctor about the IVF protocol, I was surprised to find — in my many attempts to get the pharmacy to cooperate — that he wanted me on Clomid and injectables. Clomid is a messy drug. The first time I was put on Clomid, it sent my mental health off the rails; I was downright mean, and started to fantasize about stabbing myself in the arm. Acupuncture helped with the Clomid the second go round, but again, I started everything up so late for this cycle that I worried it wouldn't be able to counterbalance the effects of the med. To pair that with the injectable stim meds? It filled me with dread. The Menopur burns going in, and even though I was facing down my fifth IVF cycle, my fear of needles was alive and well.

There are so many reasons for this to feel heavy.

It kept happening, too, where some landmark event with the baby coincided with my body doing something womb-intensive, and emotionally intensive, to boot. Period one day, adoption hearing the next — literally. I was a bundle of nerves. Raw ones. Head between knees, braced for impact.

Adoption Day was anticlimactic. Our lawyer represented four queer couples in their second-parent adoptions. We were the second of the four to go into the judge's chamber. The lawyer asked me a rapid-fire series of questions — where I lived for the past five years, who I was married to, how much money we make, whether I understood that this ruling would mean I am a legal guardian of my child forever, and it could never be reversed.

The judge never even looked up as I answered. When he granted the adoption, I felt nothing. I thought I would feel something, though I didn't know what. But no. It was just an expensive, unnecessary, humiliating hoop to jump through.

[The doctor] decided to throw the entire kitchen sink at my uterus to try and make it pump out eggs.

Literally the next day, we went to the fertility clinic to do baseline blood tests and ultrasound for the impending IVF cycle. Everything looked good, and the doctor gave the go ahead to start meds. He decided to throw the entire kitchen sink at my uterus to try and make it pump out eggs, and the first up to bat was Clomid. Getting through was, in my mind, a matter of cutting every possible stressful thing out of my life and just trying to chill the f*ck out. Someone send puppies.

We had five follicles after five days of Clomid. I thought, with all the meds, we would have seen more growth. It made me feel panicky, like I took too much time off and this was proof of my huge AMH drop (anti-Mullerian hormone is a measure of ovarian reserve). I posted the update in the fertility group I'm a part of, and people seemed excited. Fel said that should give me some perspective, but it didn't.

It still felt like my body was betraying me. It still hurt.

Over the next week, I got up to nine follicles, then back down to eight, along with a rise in estrogen. Things were looking up. I started to find some hope in the protocol.

It even happens in fertility groups. Someone comes back with a ton of eggs, and you think, 'Psh, why are they even here?'

When we first got married and started talking about babies, I used to be devastated that I couldn’t procreate with Fel the way straight couples do, that our children wouldn't share 50 percent of her genes and 50 percent of my own. Back then I was also naive enough to believe I was fertile. I never once questioned it. My sexual education didn't include fertility education; I thought just about anyone with female sex organs could pop out a kid easily enough — as long as they were younger than 35.

Being infertile changes you. It makes you jealous and angry and sad and scared. Everything becomes about one's ability to create and sustain life.

I would see a pregnancy announcement on Facebook and immediately think about how fertile that person was and how lucky they were — and how they probably didn't even know how lucky they were. I even felt it in my fertility group a couple of times. Someone would come back from an egg retrieval with a ton of eggs, and instead of being excited for them, I'd think, "Psh, why are they even here?"

Being infertile makes you petty.

In the end, the doctor retrieved eight mature eggs from my uterus. Eight potentially golden eggs, six of which fertilized into simple 1-3 cell embryos by the next morning.

Welcome to the fam, little embryos. May the odds be ever in [our] favor.