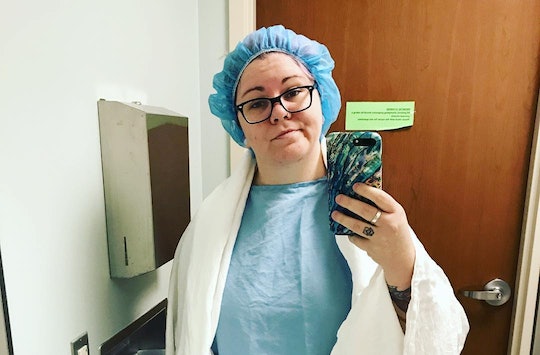 You Want To Have A Baby, But What Do The Blood Tests & Background Checks Say?

Dese’Rae has been undergoing fertility treatments since 2017. In January, she welcomed a son, carried by her wife. This is the third installment of her Trying diary, and follows Des through a battery of fertility blood tests and adoption paperwork. You can read the previous entry here.

This month, we sat through our initial consult with the adoption lawyer. Yes, I have to adopt my own son to ensure full parental rights for myself.

Marriage equality has been A Thing across the U.S. since 2015. I was involved in Gus’s conception from the beginning. My name is on his birth certificate. Given those factors, you might assume that I am his legal parent; you would be wrong, because I’m not genetically linked to him.

The official story is that parentage laws vary from state to state and the law seems unable to keep up with advances in assisted reproduction, but it feels a lot like another way to discriminate against queer families.

Several things need to happen before we even petition the court: We both have to get clearance under the Adam Walsh Child Protection and Safety Act indicating that we've never been accused of being, or convicted as, sex offenders in every state we’ve lived in for the past five years (part of this includes having to provide every address each of us has lived at, dating all the way back to 1975 — before we were even alive). We have to get fingerprinted. We have to submit to background checks. I have to provide proof of my divorce from my ex (which feels extra gross because that’s a part of my life that I’d rather didn’t muddy this part of my life). And we have to drop nearly $3,000 on legal fees.

This will take months, but I look forward to the day he’s legally mine. He’s always been mine anyway.

After my miscarriage the same week of Gus's birth, our doctor suggested we do a blood draw for a recurrent loss panel. The panel tests for autoimmune and coagulation disorders that don’t get in the way of conception, but might keep a person from being able to maintain a pregnancy. He also put in an order for updated FDA tests (this is done annually, and is mainly to check for STIs).

I’m a needlephobe, so I avoided it for months. They drew 16 vials of blood, all told. It took nearly three weeks to get complete results back. They’re good and bad. Good because I’m all clear on clotting and autoimmune disorders. Bad because the tests really gave me no answers. The only real change worth noting is that my AMH (anti-mullerian hormone — a measure of ovarian reserve) went down from 0.8 to 0.5. Normal range for my age at time of testing was 1.5-4.0; 0.5 is low, and anything lower is no bueno.

None of this is news, based on my performance thus far. For me, it’s just confirmation. I was told in the beginning that everything was within normal range and it should be easy to get me pregnant. Hearing that, but then having failure after failure, has been deeply frustrating. I kinda wish realistic expectations had been set for me from the beginning. Maybe it would have softened the repeated blows to my heart.

Babymaking is set up based on the assumption that you will be able to procreate biologically. I’m not talking about male/female procreation — I’m talking simply about the expectation that a woman’s body works the way we're taught it should. But it gets awfully lonely when our bodies don't deliver (no pun intended).

Many of us forced to make use of assisted conception (thanks, infertility!) don’t talk about the process, mainly because it feels like a failure of the body — a betrayal of one of its fundamental purposes. We suffer through the confusion of the diagnoses; the burn of the meds as they course through the needles and into the flesh; the fatigue, the hot flashes, and the moodiness that come with pumping all those hormones into your body. And we do it in silence.

We don’t announce pregnancies until 12 weeks, either. Twelve weeks is the point at which the possibility of miscarriage drops significantly. Meaning that many women who suffer an early miscarriage like mine are, again, silent in the face of a loss — this time, because of social mores. We deal with it privately, quietly pushing the pain down deep, forcing ourselves to forget every hope we attached to that tiny mass of cells that could have been a little person who inherited our kindness or our nose or our deep-seated love of music.

Even though research indicates that, when we struggle, the thing that helps most is to share, silence begets silence. So when there’s a “failure,” it's hard to break rank. An estimated 17 percent of pregnancies end in miscarriage per CDC data, which means more than a million women suffer alone each year — and this doesn't even include the 12 percent of women aged 15 to 44 in the U.S. who have difficulty getting pregnant or carrying a pregnancy to term. All because we are not set up to communicate about fertility or pregnancy loss. We are not set up to provide one another the village, in the age-old adage. Not when it comes to matters of the womb.

I've been filled with anxiety, crying randomly, and I can't pinpoint why, exactly. I’m definitely still struggling with the decision of whether or not I want to keep going with treatments. IVF is so invasive, and it's already failed me three times. It's a consuming spiral I fall into every day. Maybe my subconscious is working overtime looking for an answer.

I told Fel how stupid I feel. I went through months and months of treatments because I thought I knew what I wanted. But now, after all of it — the failed cycles, the miscarriage, almost losing Fel — I’m so lost. She said, “So many things have happened since we started down this path. It's totally reasonable that you might change your mind.” It alleviated… whatever it was I was feeling, but only for a moment.

I’m still here, still confused, still asking question after question, trying to find my way into whatever my answer is, and nothing is leading me there.

I can't feasibly do a cycle for another couple of months. It gives me extra time to think, but… I really wanted some answers from those blood tests, and all I got was confirmation that my body is sabotaging me. Now that I'm 35, this whole thing feels extra impossible, like I've crossed some sort of invisible line in the sand.

Earlier this month, I drove through Lancaster, Pennsylvania, for a work trip. I saw a billboard that said, "Is 2018 the year of fertility?"