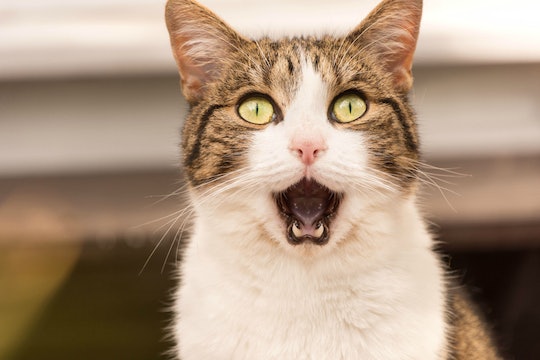 "Ellie" is a great cat name, admit it.

Choosing a name for your baby is always a tough one, but one family has found themselves in an interesting and tricky dilemma. Specifically, one woman who is pregnant with a daughter is furious over her sister "stealing" her baby name for a cat. At first blush, this looks like an easy fix. Just rename the newly adopted cat and be done with it. But, as ever, the problems go much, much deeper than that. So let's delve in, shall we?

A woman recently took the popular sub-Reddit group "Am I The A-hole" with a throwaway account to get some help from Redditors about a recent family issue. According to the post, her twin sister "Mindy" is currently expecting her third child, a little girl, after welcoming two boys. Her sister is apparently "ecstatic" about having a daughter, but she and her husband chose to keep the new baby's name a secret until she was born. Foreshadowing alert.

Now, the poster's fiancé recently surprised her with a rescue cat from a local shelter named "Ellie," a name that had special significance to her. "I teared up cuz that was my nan's nickname," the Reddit user wrote. "She died two years ago and my life still feels empty without her. Ellie's sweet demeanor and loving spirit made me feel as if she were a gift sent by Nan herself. We decided to keep the name as it was as a tribute to her, which Amy thought was sweet and that Ellie was perfect."

Unfortunately, the poster wasn't the only person in the family who thought the name Ellie was perfect. "Mindy called me yesterday and started screaming at me for being a coward and ignoring her," she wrote, adding that she had shared a photo of her new cat on social media, but doesn't use it very often so she wasn't around to see new notifications. "Turns out she planned on naming her daughter Eileen after our nan and having everyone call her Ellie."

A family is feuding over a cat's name.

Neither of the sisters wants to back down; the poster explained that she was very close to her grandmother and cannot have children of her own, while her twin and other members of the family are insisting she should rename her cat. So, now it's time for the internet to weigh in.

One person wrote that this really should not be a big deal. "NTA," one person ruled, "why can't they both be named Ellie? They act as if the name is trademarked."

Another agreed that multiple family members can have the same name, even when they're human beings. "When my grandfather died my aunts and uncles all rushed to have babies specifically to name them after him... Somehow they all survived having the same name!"

In fact, most of the responses to this problem pointed out it isn't really a problem at all. Cats and babies can have the same names. "I second this! I grew up with a cat with a very similar name to me, the cat came first," they chimed in. "Didn’t stop my parents and has never been an issue for me!"

Beyond the Reddit comments, perhaps the original poster can let her pregnant twin sister know about a trend in the United Kingdom of intentionally naming pets popular baby names. So no more Spot, Rover, etc. More like Bella and Lola for British fur babies, which means this family will be on trend. Even if they're all fighting.