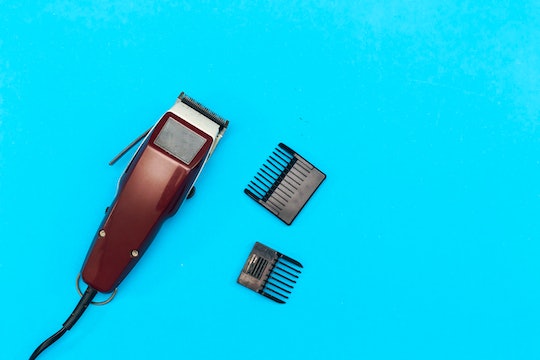 After one 8th grader got sent to the principal's office for breaking the school's no-hat policy, Jason Smith decided to help and talk with the student instead of sending him home for the day. By taking time to ask him why he was wearing a hat, Smith learned that the boy wasn't being defiant just because; he simply wanted to cover up his hair. So the school's principal fixed the student's haircut so he felt comfortable taking his hat off and, in turn, didn't miss any school.

Smith is not only the principal of Stonybrook Intermediate and Middle School in Indianapolis, he is also a father and a barber for his own son. "He just let me know his parents got him a haircut recently, but he didn't like how it came out," Smith told the Indianapolis Star. "I'm assuming he just didn't want kids to laugh at him."

So Smith pulled out his phone to show him pictures of how he cut his own son's hair and then offered fix up the student's hairline. The boy agreed and got to carry on with his school day, as Smith shared with the Indianapolis Star.

Smith's touching act of kindness has gone viral on social media. Back in February, Lewis Speaks Sr., the school's resource officer, shared photos of the sweet moment on Facebook and called Smith an example of leadership.

"The principal could have easily called the child's parent and put him out of school for the day, but he took time out of his busy schedule to make sure the student was successful completing his first day of school," Speaks wrote on Facebook. Speaks also shared that the boy thanked Smith for fixing his hair and "apologized for his behavior then went to class."

Smith isn't the only good samaritan barber at Stonybrook Intermediate and Middle School; in his Facebook post, which has over 53,000 reactions and more than 27,000 shares, Speaks also gave a shout-out to local barber La Don Allen who left his shop to help another student who had said, "I hate coming to school without a haircut."

"These two didn't do these wonderful gestures for any accolades. They did it because they understand the concept of leadership,'" Speaks wrote on Facebook. "A GREAT LEADER ALWAYS recognizes that sometimes it's necessary to step outside of your comfort zone and daily routine to set others up for success."

Folks on social media have also been touched by Smith and Allen's gestures. "Finding solutions, instead of creating more problems. Thank you, Principal Smith," one admirer tweeted. "This is what is the best and most constructive way of handling problems. I know that he won't be able to handle every problem this way, but kudos to you, sir." Another fellow educator commented, "This is one of the best stories I have heard in my 29 years of teaching!!! Talk about making a difference and changing lives."