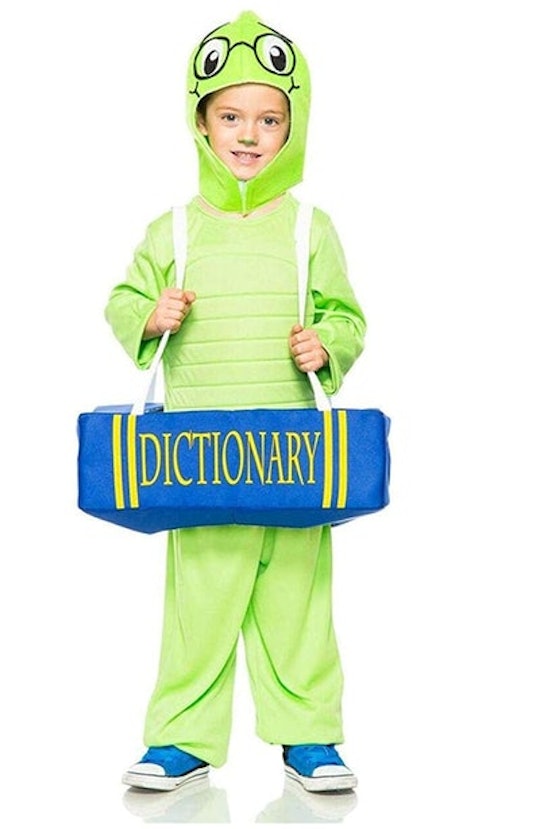 Get Laughs & Groans With These Punny Halloween Costumes

No one will boo these scary good puns.

Costumes can be many things: cute, frightening, clever, funny. But punny Halloween costumes are my favorite of all, because who can resist a play on words brought to life? Sure some naysayers will claim to not like puns, but even the curmudgeons will grumble or groan when they realize that your family is dressed as living, breathing word play. So if you want to have some fun, wear a costume that no one else will think of, and get reactions ranging from awe to groans, then a punny costume is your best bet.

These family-friendly costumes are creative and silly, but there’s actually something, dare I say, sophisticated about a pun. It may take a minute for your kids to get on on board, but once they get the joke, they’ll be sold (and if you’re putting your baby in costume, you’re in luck as they’ll go along with the plan, unless it involves a hat).

Some of the ideas on this list are store-bought costumes, some are DIY, some you may even be able to pull together at the last minute. From party animals to chilly peppers and even an idiom that could get a bit scary if you want to, these pun costumes are eerie-sistible. Yes, pun intended.

1. A Family Of Book Worms

If your child loves reading almost as much as they adore the slimy creatures that are everywhere after a rainstorm, then they’ll definitely appreciate this punny “bookworm” costume. These costumes are adorable, plus they’re super comfy, and there’s a matching look for everyone in the family.

If you’d rather go the DIY route, this one would be easy to recreate with some bright green leggings, a top, or a sweat suit, (don’t forget the tentacles), paired with books; for a lighter and easier costume you could secure photocopies of famous book covers to the look. Voila, a family of bookworms, and everyone will get the pun.

Candy is always a cute Halloween costume, but turn it into a pun by being a sweet tooth. This clever candy necklace costume from Studio DIY is made using a rope strung with cut and spray-painted pool noodles, and the tooth comes from simple foam board.

Not into DIY? No problem. There are tons of kids’ candy costumes to choose from (like this Hershey Kiss costume, or this M&M t-shirt from Etsy which comes in newborn through adult sizes). It’s super easy to make the tooth and it doesn’t require a ton of artistic talent either (mostly just a steady hand) but if you prefer you can also buy a tooth costume.

Here’s a punny Halloween costume that may take a minute for people to figure out, but that’s part of the fun (plus it’s always satisfying to see their aha/ groan moment when the pun clicks). If you’re a family of three, a two birds, one stone costume is cute and you can take it in so many different directions (plus whoever gets to wear the onesie is a clear Halloween winner).

If you like to embrace the gory side of Halloween, you could riff of the full phrase “killing two birds with one stone” by giving the rock a pretend knife to hold, or adding some fake blood to the birds.

Sure an animal costume is always cute, but a brood of party animals is epic. This punny costume is easy to throw together at the last minute, especially if you have some party hats laying around and a leopard print shirt. Plus, this costume is face mask friendly (if you get a snout mask), which helps when a kid doesn’t want to wear a face covering because it “doesn’t go” with their costume.

Whether you buy matching cozy animal onesies for everyone in the family (bonus points because they’re warm and will get worn again) or you let your kids pick out their favorite animal costume (I personally love this lion costume from Pottery Barn) all you need is a festive hat or some streamers to make the costume party on.

Take a cue from The House That Lars Built and be a literal greenhouse for Halloween. There’s a tutorial on the blog; for $3 you can download a template to make the greenhouse headpiece and an SVG file for the wildflower decals, which should be printed on sticky or iron-paper. If you have one, use a Cricut machine to make perfect cuts.

Instead of following the tutorial to a T, you could take inspo from it while adding your own spin (say by taping some paper flowers to a green dress). Everyone can have the same costume, or make your little one a ray of sunshine or a flower.

Adults get in on the fun too with a green barista apron and fuzzy ears for a costume that’s less than $35. And if someone in your family wants to dress as grande coffee or a pumpkin spice latte, by all means.

Lola Lambchops shows that you don’t have to spend a bunch of money to have an awesome punny Halloween costume. In fact, this “chilly” pepper is made almost entirely from things you have around the house, like hats, gloves, and any other warm clothes (so you’ll be cozy while trick-or-treating). The chili pepper is made from cardboard that’s cut and spray-painted (a good use for all the shipping boxes you may have around the house).

For the little ones, opt for a scary cute hot pepper costume. And if you want to take this pun to take next level, you could call yourselves The Red Hot Chilly Peppers.

Who doesn’t love a good old math pun? Delight nerds everywhere with this pumpkin pi costume the whole family can enjoy. You can take it the literal root and getting matching t-shirts that spell out the pun (there’s a size for everyone from little kids to adults) or you could make people really have to think before they finally get your costume. For that, there’s this super cool calculator sweatshirt, and the always adorable baby pumpkin outfit, equipped with a little stem hat.

If you already have a pumpkin costume from a previous Halloween, it’s super easy to turn it into “pumpkin pi” by putting the pi sign on with some dark or glow-in-the-dark tape.

9. Pigs In A Blanket

If your kids are into pigs these days, you could of course be the Three Little Pigs, but you could also take the costume into a weirder, more unexpected direction by being pigs in a blanket. After all, who can resist the salty appetizer?

Your little one will get to wear a pig costume (because it’s too cute to resist) but all the adults need is some ears, a snout, a tail and maybe a pink shirt. Throw on a croissant-colored blanket and you’ve got a punny costume that’s cozy to boot. You may want to safety-pin the blanket to your child’s shoulders (and make sure it’s small so it won’t drag).

10. A Dime A Dozen Family Costume

It’s always creative to bring a commonly used idiom to life, especially when you or your kid gets to dress as a box of donuts. The tutorial on The Merrythought shows you exactly how to make this DIY donut costume. It requires felt, Velcro, glue, and some sewing chops (though you can use glue or buy pretend donuts if you don’t have a sewing machine).

To make this costume punny, you’ll need someone to be the dime of course. Get creative with aluminum foil and a piece of round foam board, though it’ll be easier to be a dime t-shirt.

These punny Halloween costumes for the family will win the costume contest. And if not, they’ll at least get a laugh (or an eye roll).