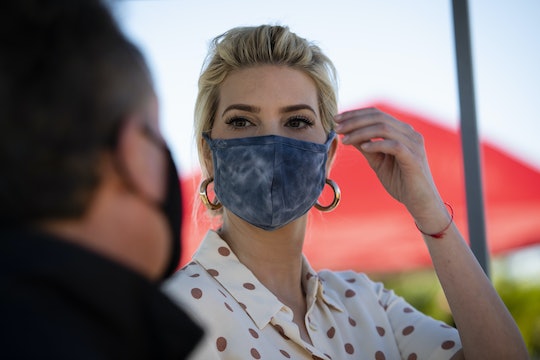 Ivanka Trump has been silent on social media since leaving the White House in January, but nearly four months later, she shared photos of herself proudly getting vaccinated against COVID-19. The photos were puzzling to some considering how often her own father downplayed the seriousness of the global pandemic while in office, despite contracting the virus himself.

“Today I got the shot!!,” Ivanka captioned photos shared on both Instagram and Twitter, which were taken at a South Florida CVS, the Miami Herald reported. “I hope you do too! Thank you, Nurse Torres!”

Adults over the age of 18 are now eligible to get vaccinated in Florida, which is where Ivanka currently lives with her family. President Donald Trump, who previously had COVID-19 last year, quietly got vaccinated with his wife Melania Trump, before leaving the White House in January, according to The New York Times. Ivanka didn’t get vaccinated until this week, the Associated Press reports.

Throughout the pandemic, Trump had pushed for schools to reopen before vaccines began to roll out, mocked President Joe Biden for wearing and supporting masks, and continued to call for life to “get back to normal.” Many felt Trump handled the pandemic poorly, which was a major factor for voters in 10 states in the 2020 presidential election, according to the Washington Post. Ivanka had publicly defended her father’s handling of the pandemic, stating that he had taken “unprecedented” action at the start of the crisis and was a critic of “blanket lockdowns.”

Now, seeing Ivanka proudly share photos of herself getting vaccinated led people to call her out for not thanking President Biden and his administration’s progress to help defeating the coronavirus. In March, for instance, Biden met his goal of vaccinating over 100 million Americans, including 80% of K-12 teachers, according to The New York Times.

Another said, “It came too late, if your dad had accepted the emergence of the virus early enough maybe millions of lives could have been saved Ivanka.”

“So if your father told America that COVID was a hoax, why did you stand by say nothing???” one more said. “Do you have any idea how many lives could have been saved???”

Some skeptics of the vaccines, however, commented that they were “disappointed” in Ivanka for getting the shot. The U.S. Centers for Disease Control and Prevention (CDC) has stated that the vaccines are safe and effective, and it’s recommended that people get their vaccine as soon as they are eligible. The nation’s leading expert in infectious disease, Dr. Anthony Fauci, has also said that he has “extreme confidence” in the science behind the Moderna vaccine, which he received this past December, according to ABC News. “I feel extreme confidence in the safety and efficacy of this vaccine and I encourage anyone who has the opportunity to get vaccinated so that we can have a veil of protection over this country, that would end this pandemic,” he said in December.

“So so disappointed in you! How could you,” one person tweeted at Ivanka.

“A year ago you seemed so smart,” another said.

While some were frustrated by her past actions, or lack of action during her father’s presidency, and others criticized her for even getting the shot, a few said they hope Ivanka can help “encourage” skeptical Trump supporters to get vaccinated.

“I know you're getting backlash from both sides, out of principle, I do appreciate your attempt to encourage Trump supporters to get vaccinated,” one commented. “There's aways be echo chambers on Twitter, but just maybe you might have changed a person’s mind of their antivaxx stance & saved lives.”

“Thank you for posting this, hopefully it will help some of the vaccine hesitant people, that your dad‘s administration produced, to get the vaccine,” one more said.

“I may not have agreed with you politically, but I'm totally behind this. Good for you, good for ANYONE with even a modicum of common sense getting their vax. This is how we will overcome this virus and get back to normal,” one commented.

Political strategist and commentator Ana Navarro tweeted that she was “glad” Ivanka shared her photos. “Given politicization of vaccines by many Trumpers, I’m grateful she made this public and is using her platform to promote vaccines,” Navarro said.

Ivanka, of course, is not the first high profile person to promote getting vaccinated. Biden got his second dose of the coronavirus vaccine on camera in January and as vaccine rollout efforts get underway across the United States, more celebrities are encouraging others to get their shot. This Sunday, in fact, an hour-long special airing on NBC at 7 p.m. will feature a number of politicians, athletes, musicians, and actors encouraging people to “roll up their sleeves” and get their vaccine.