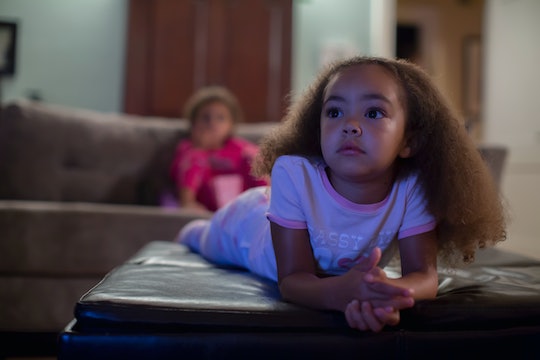 Trump's Diagnosis Is The Perfect Reminder To Act Like Our Kids

There are a million memes and quotes and cutesy sayings on wrapped canvases on Etsy that tell us the same thing: we teach our children a lot, but they teach us so much more. And as news of President Trump's COVID-19 diagnosis sweeps the world, it's more important than ever to heed that lesson. Our kids can and are teaching us so much.

When I woke up this morning, I turned on Good Morning America, half-convinced I had dreamed that President Trump had COVID. My 6-year-old, Alice, ate her Chex and watched the TV thoughtfully. I don't often watch the news with her, but I noticed her paying attention. "President Trump has COVID-19," I told her. She dropped her spoon in her bowl.

"What?! He has COVID?" Her eyes were wide, and I could see that she was frightened. Because here's what my daughter knows about COVID: she knows it's dangerous. She knows it stopped her from seeing her grandparents and friends and that she had to stay 6 feet away from people on our afternoon walks. She knows it cancelled her t-ball season and her Girl Scout meetings and that she couldn't finish kindergarten. And she knows it's why she has to wear a mask to first grade.

Image after image of Trump rallies and White House meetings played on the TV, and Alice swallowed her cereal. "But why aren't any of them wearing masks?" she asked.

I wanted to give her a snarky answer, the kind of thing I see screaming across my Twitter feed: "Because they don't care! Because they claim it's a hoax! Because they'd rather 200,000 Americans die before they lose supporters!" But I didn't. I sighed. Because here's what my daughter knows about President Trump: she knows he's a bully. She knows our family doesn't support him. She knows he has done a lot of things to hurt a lot of people. And she knows he's a person.

And it's my own reaction to her — not telling her he deserved it, not suggesting maybe this was some celestial response to his policies, not telling her how to feel about it — that has her teaching me a valuable lesson. I'm not saying my child is pushing me to send flowers to the White House or to drop to my knees and beg for Donald Trump to be spared even a single cough, in the name of the NRA, amen. But wishing death or illness on a person — hoping it's some sign from Ruth Bader Ginsburg, crossing our fingers that we'll never have to think about him again — is is not a child's instinct in the face of awful news. And it shouldn't be ours, either.

We teach our children to help others when they can. We ask them to share, to be kind, to speak up if they see something wrong. They are honest, they are empathetic, they wear a mask without a single complaint because you've told them those masks protect the people around them. They are the antithesis of Donald Trump.

And so is their response to his COVID-19 diagnosis. There is no gloating, no boasting, no vengeful glee. They are going high when others go low. My daughter isn't going to color a picture to cheer up Trump, and she probably won't mention the fact that he has COVID again. But she'll remember how I reacted when I told her.

And I'll remember how her response came just as easily — shock, surprise, and concern, the kind of fear that's all mixed up with sympathy. Because COVID is scary, and the thought of anyone suffering from anything — especially something that could be prevented — is upsetting.

And then she'll remember how he should've worn a mask.