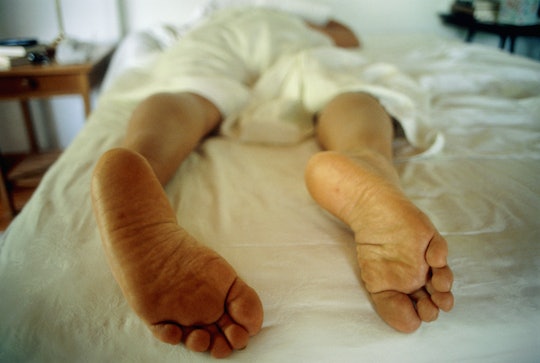 Perhaps it’s magical thinking to wish that we could do away with all of those harmful mom clichés on one fell swoop. But if we could get rid of just one, my vote is on this one today; moms taking on all of the morning workload with a martyred little quavering smile. It’s not right. And Reddit is applauding one mom of five in particular for drawing her line in the sand and letting her sleeping partner know she’s had enough of carrying the responsibility on her shoulders alone. Adding “wake up partner” on her long to-do list was clearly one item too far for her.

“My (26F) and my partner (28M) have 5 daughters: 7, 6, 4, 3 and 5 months,” wrote the anonymous mom on the sub-Reddit forum Am I The A**hole. “For a long time there's been an issue with him getting up to help with the kids of a morning: he thinks he should be able to sleep in on his days off work, while I think he should get up when the kids and I do, or we should at least be alternating who lies in a bit. We've been seeing a therapist who has mentioned he should be helping more in the mornings.”

Despite the nudge from their therapist, her partner did not wake up one morning when they were meant to spend the day at the zoo with both sets of parents and their five daughters. “My alarm went off at 6.30am and I got up, while my partner kept sleeping. I decided I wasn't going to wake him this time and continued getting the kids ready. At 8am he was still sleeping, so I loaded the kids in the car and we set off. We arrived at the zoo at 9.30am, and his family asked where he was. I mentioned he was still in bed and chose not to come.”

Her partner called her more than three hours after he was meant to wake up asking where everyone had gone. He was upset with her for leaving, called his mom, and then his mother told her she “was being unfair” and “should've given him a shake to let him know he needed to get up.”

Reddit does not agree with the sleeping dad’s mother. In fact, social media users applauded the mom of five for standing her ground. “What makes him believe he can just stop being a parent when he feels like it?” wrote one Reddit user.

Another pointed out how wrong it was for him to call his own mom to complain. “My fave part of this is where he was upset that he missed out on the trip do he called his mum to blame his wife as though there was nothing he could have done to prevent this,” they commented.

Moms carrying the burden of raising children, whether it’s emotional labor or the actual fundamentals of preparing them for the day, has become a sore spot for many couples in recent years. Naturally it’s been a problem for decades, but it seems many moms are speaking up about the inequity of it all. As one Reddit user put it, “You aren’t his mother, he isn’t a child. Tattled to his mother. The man needs a wake up call for sure, just not the kind he asks you for.”

Perhaps this time he’ll actually wake up on his own.

More Like This
"Crybaby Ambulance" In Europe Will Help Exhausted Parents
Dr. Jill Biden Just Delivered Some Frank, But Powerful, Advice On Motherhood
Little Miss Memes That Speak To Our Mom Souls...
10 Parenting Lessons We’ve Learned From 'Only Murders in the Building'