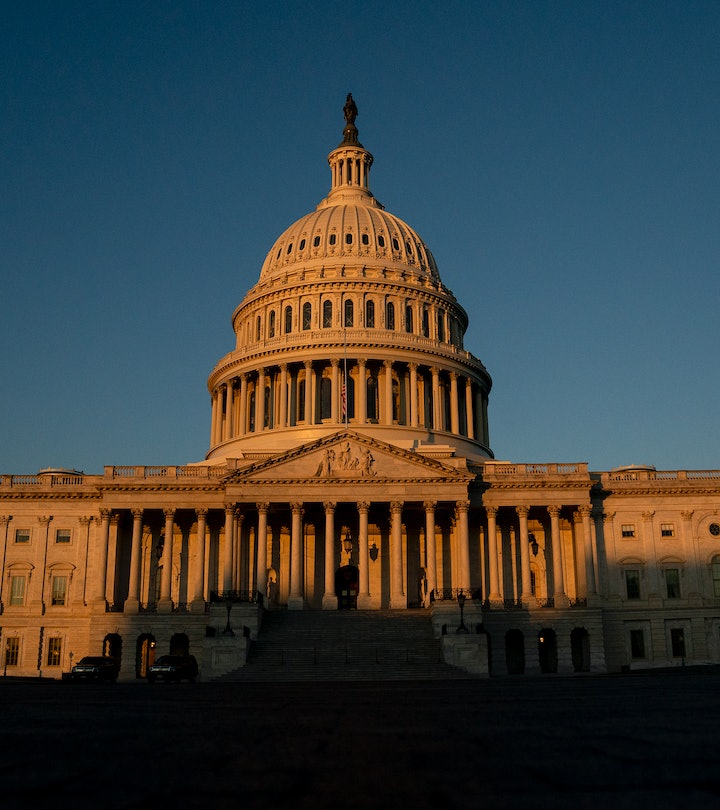 If Kids Can Deal With Metal Detectors At School, So Can Republican Congress Members

Following the January 6th riot at the Capitol, new safety measures in place have been met with annoyance from GOP lawmakers.

After violent pro-Trump extremists stormed the Capitol last week, many Democratic politicians have asked for stricter security measures as additional safeguards. While this might seem like a reasonable request, not everyone agrees. Some Republicans are protesting the Capitol's new metal detectors, deeming them a violation of their second amendment right to bear arms. Perhaps these same Republicans should visit a public school one of these days, because American kids have been walking through metal detectors to get to class for years.

On Jan. 12, Republican Rep. Lauren Boebart from Colorado refused to allow a search of her purse after she set off a metal detector at the Capitol, according to CBS Denver. This same congresswoman had promised to bring her gun to Congress once she was elected, The Washington Post reported, and blasted the new safety measures put in place at the Capitol as a "political stunt." In a statement to CNN, she said, "It is a shame that Nancy Pelosi is trying to disarm Members of Congress in the very place that needed more protection on January 6th. It is clear metal detectors would not have deterred the violent acts we saw; this political stunt does nothing to improve the safety of Members in the Capitol complex."

Rep. Madison Cawthorn of North Carolina also admitted in an interview to the Smoky Mountain News that he had been armed during the riot last Wednesday, inside the Capitol building. Meanwhile, Rep. Steve Stivers of Ohio reportedly told Capitol police he believes the metal detectors are "unconstitutional."

While these Republicans and more decry the use of the metal detectors at the Capitol, many are pointing out the hypocrisy of their complaints. Because schoolchildren across the country have been walking through metal detectors for years in an effort to protect them from potential school shootings.

Social media users are pointing out that students have been walking through metal detectors for years.

Rep. Debbie Lesko of Arizona's tweet, "For members of Congress to enter the floor of the U.S. House, we now have to go through intense security measures, on top of the security we already go through. These new provisions include searches and being wanded like criminals. We now live in Pelosi’s communist America!" was met with this response from Twitter user Kelsey McKinney: "LOL this is what I had to go through every day for four years TO ATTEND HIGH SCHOOL."

Kids apparently can deal with metal detectors better than Congress.

One mom suggested that Congress could learn to "deal with it" like her 10-year-old daughter, "There isn’t a metal detector at my children’s elementary school but there is at the gifted school my daughter gets to attend once a week. They were told to avoid wearing a backpack at all (to school!!) to speed up the scanning process. Congress can deal just like my 10 yo did."

Parents who want to volunteer in their child's classroom have to go through metal detectors.

Another mom took to Twitter to remind Congress that she had to go through metal detectors, as well as a background check, simply to volunteer in her child's classroom. "I have to do this (in addition to a full background check) to volunteer at my son's elementary school," Stassa Edwards tweeted.

Metal detectors are used all the time.

It isn't just schools, of course. Reporter Alicia Rodriguez pointed out that sporting events also employ metal detectors, "To take but one example, you have to go through a metal detector to go to nearly any sporting event, but sure, Congress that was just overrun in an insurrection attempt should be a free-for-all."

Gun reform laws might help out with those pesky metal detectors.

Finally, Twitter user Nancy McMullin hit the nail on the head. "It is pathetic to hear all of the complaining from some Congress members that had to hide under a table fearing for their lives and now have to go through a metal detector. Do they think of the children that go through this everyday because they won’t pass any gun reform laws??"

Republicans might not like these metal detectors installed at the Capitol. But, like students and regular American citizens everywhere, they're probably just going to have to get used to it.