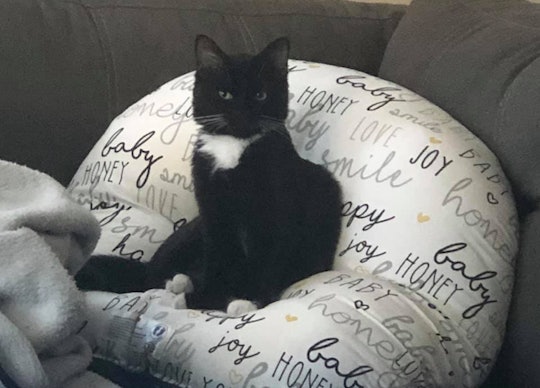 Psst! Your Cat Can Use Your Baby’s Recalled Boppy Lounger

You can also donate it to your local animal shelter.

More than 3 million Boppy Infant Loungers were voluntarily recalled earlier this month after eight infant deaths were associated with the popular pillows. The Boppy Company is issuing refunds if you provide photo proof that the item has been destroyed by “cutting it in half and making it unusable,” but parents might want to consider repurposing their recalled Boppy Loungers as an adorable pet bed.

While these loungers pose a risk to babies, they are actually kind of perfect for pets. In fact, the Humane Society of Washington County is asking people to use their Boppy Loungers as pet beds or to donate them to your local shelter for animals in need.

Boppy Loungers can be reused as pet beds.

“Recently, there was a major safety recall on infant Boppy Loungers. Rather than cutting them in half and destroying them as the manufacturer suggests, please keep our furry friends in mind,” the Humane Society noted in a recent Facebook post. “These make wonderful beds for cats, kittens, and small dogs! These loungers have a dip in the middle of them allowing animals to snuggle in feeling safe and secure.”

“If you or someone you know has a defective lounger, feel free to drop it off at our office,” the post continued. “The critters would be ever so grateful.”

Folks on Facebook loved the idea, whether they were donating the discarded loungers or using them for their own pets. “Cats love them! So glad someone thought of this for shelters,” wrote one social media user, while another noted that destroying the loungers wouldn’t really do anything of use. “What does cutting it in half do? If parents are going to throw them away anyways why do they need to cut them in half? Also, donating them to animal shelters is an awesome idea!”

While some consumers might prefer the refund, donating the recalled loungers to an animal shelter or giving them directly to your pet is also a great idea. Just imagine all the cute photos.