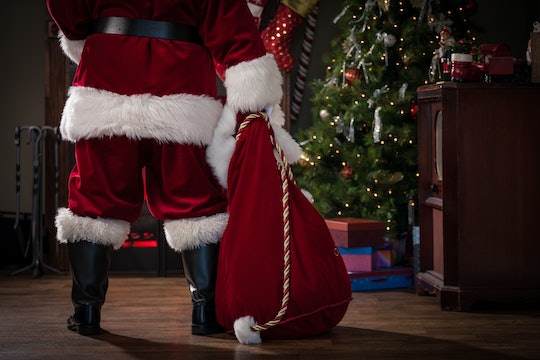 Photoshop Santa Claus Into Your Living Room With These Free Apps

Let's face it, there’s been a lot less magic and joy over the last year than usual, and finding small things that might be even a little bit entertaining is huge. Thankfully, there are a few fun opportunities to make the holidays a bit brighter, like these Christmas apps that allow you to insert Santa into your home via augmented reality. It's like playing Pokémon, but you're catching Jolly Old Saint Nick instead.

It's creative as heck, and way more convincing than some of the things I've tried to convince my kids of the Santa myth. (Also, this requires 100% less glitter, which I am here for.) The apps are all basically the same; you film or take a picture of your living room or wherever, and then click a button to insert and size Santa so that he fits appropriately into the space. Some of them have Santa unpacking presents, and others just have a Santa in repose. They’re fairly user-friendly, most are free, and available across iOS and Android. Just make sure to check the permissions you accept before you set them up to make sure you’re not accidentally giving a free app information you don’t want them to have.

I took the time to download and test drive all these (and more) applications to find the best and easiest to use. After excluding any apps that were slow to load, glitchy, or otherwise too costly, here are the best of the bunch.

Kids believe in Santa for such a brief period in their lives. Why not make it as magical and real as you can? The world and real life can creep in at a later date. Right now? It’s time for fantasy.

This article was originally published on Dec. 23, 2020