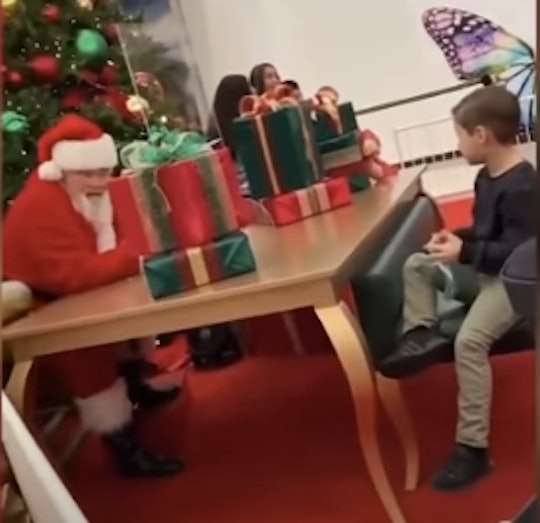 But another Santa quickly stepped in to surprise him.

After footage of a mall Santa denying a boy a Nerf gun went viral, another Santa Claus showed up at the young boy's house with a special surprise.

Chicago-area mom Sabella DeCarlo recently took to Facebook to share a video of her son Michael sitting down for a visit with Santa at the Harlem Irving Plaza Mall in Norridge, Illinois. The video, which was originally shared by a woman named Susan Parker on Dec. 6, sees Michael nervously sitting across from Santa due to social distancing rules and asking for a Nerf gun. The Santa in question responds, "No, no guns." DeCarlo interjects "Nerf guns," to which Santa replies, "Not even a Nerf gun. If your dad wants to bring it to you that's fine, but I can't bring it to you. What else would you like? Lots of other toys. LEGOs and bicycles."

Michael is seen crying in the video a few minutes later as his mom comforts him. "My poor baby. This was the first year Michael was excited to go see Santa," DeCarlo wrote in her Facebook post. "It was supposed to be magical but instead I had to watch my sweet little boy fight back tears because Santa told him No because of his own personal beliefs. I had to think fast and explain to him that this Santa was just a helper and not the real guy. I just wanted to console my baby and get him out of there, flipping out on Santa would have only made it worse. His Elfie is going to bring him a Nerf gun directly from the North Pole, from the real Santa, tonight."

Just two days after the incident went viral, a different Santa Claus, sent by Harlem Irving Plaza, showed up at Michael's door with a Nerf gun for him.

The initial video was criticized by conservative gun advocates who saw this Santa's personal decision to deny a little boy a Nerf gun as emblematic of left-leaning politics. Republican Sen. John Kennedy went on Fox News to discuss the incident, while former spokesperson for the National Rifle Association (NRA) and conservative podcast host Dana Loesch offered to send Michael a Nerf gun herself.

Still, some called out the conservative outcry as hypocritical, with writer and activist Charlotte Clymer, who is also a former press secretary for rapid response at the Human Rights Campaign, responding to Loesch on Twitter by noting, "The Mall Santa is absolutely ridiculous, but let's be honest, Dana: if that kid had asked for a dress instead of a Nerf gun and Santa said "sure", y'all would have wasted no time in firing up the outrage machine and grifting on that, too. It's not about the kid for y'all."

Harlem Irving Plaza has since issued a statement on Facebook, calling the incident "unfortunate." "The HIP and our third-party Santa company are distraught and deeply apologetic about the unfortunate incident which occurred at Santa set on December 6, as both parties strive for families and their children to have a happy holiday experience.Santa is heartbroken and crushed that he has made this child so sad and upset, and turned in his resignation," the mall wrote. "The Santa company will continue to remind all Santa’s how important it is to not impose personal opinions during visits with the children."

In a statement to The Daily Mail, Harlem Irving Plaza said that the Santa who refused Michael's request for a Nerf gun had since resigned and they were "deeply apologetic about the incident." The "real" Santa also apologized to Michael when he brought his present and told him he "heard about it up at the North Pole and rushed down" with the Nerf gun.

For his part, Michael was understandably pretty excited about his gift. He opened it as Santa stood smiling, all the while exclaiming "This is crazy."

More Like This
30 Instagram Captions For Baby’s First Picture With Santa
Snap A Pic Of Santa In Your Living Room With These Free Apps
How To Make Santa Footprints
How Many Elves Does Santa Have?