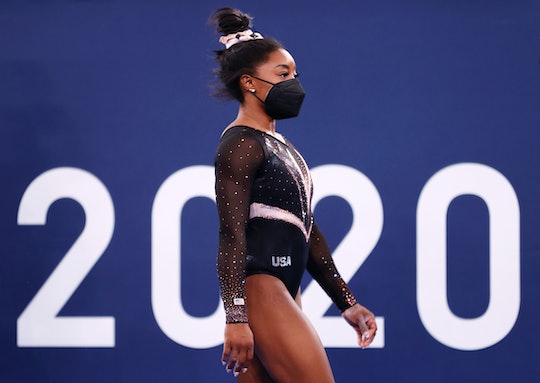 Simone Biles Has Been Crowned The Official G.O.A.T. With Personalized Emoji

No pressure or anything, but Olympic gymnast gold medalist Simone Biles has already been crowned the Greatest Of All Time. In a way some might argue is the most enduring of all: Biles has her own personalized emoji, and of course it’s a goat to represent her status. As the most mentioned U.S. Olympic athlete on Twitter, it’s just easier to use her adorable little goat emoji, clad in Biles’ signature sparkly leotard with a gold medal around her neck.

Biles is competing in the 2020 Tokyo Olympics alongside her fellow U.S. gymnasts after her outstanding performance at the 2016 Rio Olympics. There she made history as the first female U.S. gymnast to win a total of four gold medals at a single Olympic games, not to mention the fact that she won the world all-around title three times in a row.

Expectations for her are high at this year’s Olympics in Tokyo, and so she got her own little emoji pal named Goldie the goat. To remind her, and all of us, just who is the Greatest Of All Time without question.

Simone Biles has her own emoji.

Goldie the goat, dressed in an orange leotard and doing the splits, was introduced by Twitter Sports just days before the opening ceremony of the Tokyo Olympics, and Biles told fans on social media that she received a blanket featuring her emoji for her plane ride to Tokyo.

Biles’ little goat was first introduced in 2019, when she wore a leotard emblazoned with a sparkly goat that she named Goldie at the U.S. Gymnastics Championships that year in Kansas City. Biles told People that the goat was “a running joke” that she and her fans have been sharing. “I don't think of myself as the G.O.A.T. and that's not why I wear the goat on my leo. It was kind of a joke in the beginning. I wore one in 2019 and it was just funny because the haters were so upset,” she said. “What we did is to kind of tick them off even more. So I was happy because it's like good, now you guys are annoyed because you're annoying me.”

No matter how Biles performs at the Olympics this year (although I think we can all assume she will be miraculous as ever), she’s already won. She has her own emoji. Game over.