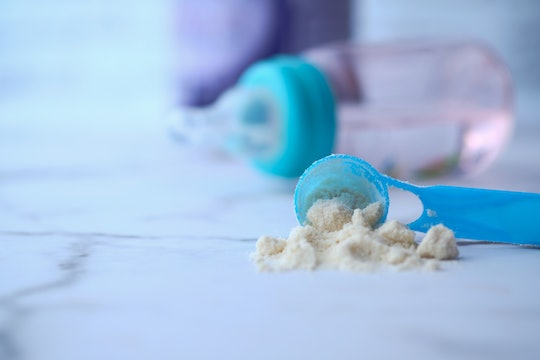 She also trashed her diapers.

Whether they want to use disposable diapers or reusable, breast or bottle-feed, the last thing a new parent needs is judgment. But that’s what one new mom who took to Reddit to vent is experiencing. Specifically that her sister-in-law threw away her baby formula and single use diapers under the guise of “cleaning.”

“They use reusable wipes/nappies, think formula is the epitome of evil, babywearing, the list just goes on,” the Reddit user wrote. “I'm the complete opposite, pacifiers, supplementing with formula due to low supply, disposable wipes and nappies.” This mom’s way of doing things apparently really bothers her sister-in-law. Like, really bothers her.

When the Reddit user’s sister-in-law babysat her 3-week-old daughter so she could celebrate her birthday, she decided to do “some cleaning and ‘threw out anything I don't need.’”

“When I went into the nursery, every disposable nappy and wipe pack was gone and replaced with some reusable cloth ones,” she wrote. “Same with my formula, there was 8 tubs and all of it was gone, I'm not able to replace them at the moment and soley breastfeeding isn't sustainable for us.”

A 19-year-old mom’s sister-in-law threw out her formula.

The young mom was left without formula or diapers, and when she confronted her sister-in-law to replace them, was told she couldn’t afford it. Which perhaps she should have considered instead of throwing out expensive baby formula...

Social media users rushed to tell this young mom that she was definitely not in the wrong. One Redditor wrote, “Formula is expensive and you say you're supplementing... your baby is still getting breastmilk but needs a little more. That's why formula was created. Your SIL was waaaaay out of line. Even if she doesn't agree with your parenting style, she has no right to sabotage it. It's the baby that will suffer. She needs to replace it all or give you the money to replace it.”

Another noted that the whole concept of being a “crunchy” parent sort of went out the window with the sister-in-law’s decision, “So she saved the environment by (checks notes) throwing away all of your supplies. Makes sense.”

Ultimately, no one has the right to make these sort of sweeping decisions for anyone else’s child, least of all if they’re going to throw out a baby’s food. Crunchy mom, silky mom, whatever. Sometimes it’s best to be the mind your own business mom.