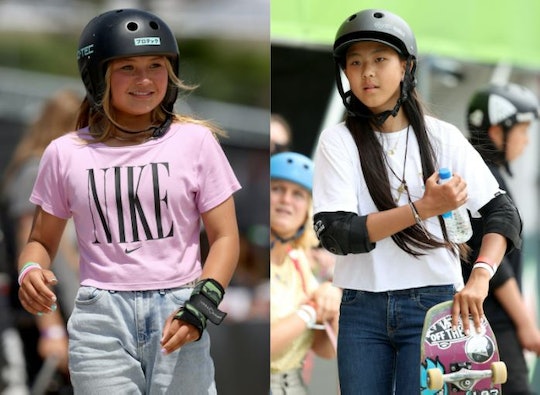 Sky Brown and Kokona Hiraki are looking to skate their way into Olympic history!

Two preteen skateboarders are in the Olympic spotlight! Sky Brown and Kokona Hiraki, both 12 years old, have officially qualified to compete in the Tokyo 2021 Olympics. So here’s everything you need to know about the young, talented athletes!

Back in May, Sky skated her way into the Sumer Olympic Games after finishing second behind Japan's Sakura Yosozumi in the Women's Park event at the Dew Tour in Iowa. The victory was a great turnaround from last year when she was going through a totally different ordeal. Last May, Brown fell off a ramp in California and broke her wrist, and suffered skull fractures.

“It was a year ago yesterday since my accident and now I’m feeling better than ever,” Brown wrote on her Instagram on the anniversary of her accident. She added, “Thank you to my family that keep me strong and make everyday fun. Thank you to the doctors and the nurses at Radys that saved my life, and fixed me. Thank you to everyone that helped me.”

Sky loves to “skate, surf, dance, laugh, and have fun,” according to her Instagram account. She’s also an author. Her book, Sky’s The Limit, is available on Penguin Random House. Sky is also a music artist; her song, “Girl,” can be found on Spotify, Apple Music, iTunes, Spotify, Amazon Music, and others.

Like Brown, Hiraki will represent her country and become Japan’s youngest Summer Olympian. Before her, it was 13-year-old swimmer, Yukari Takemoto, who competed in the 1968 Mexico Olympics.

The 12-year-old finished fifth at the Dew Tour event. She will join Yosozumi, who finished first, in the Olympic Games. “I was enjoying it just as usual. I wasn’t as nervous as usual,” Hiraki told The Japan Times.

From the looks of her Instagram account, there’s never a moment Hiraki is not skating. She even brings her skateboard to school.

The girls will be among 20 skate athletes competing. This will be the first year that skateboarding will make its Olympic debut. The Tokyo Games take place between July 23 through Aug. 8 at the Ariake Urban Sports Park in Tokyo. If either girl wins a medal, they will be the youngest Olympian since springboard diver, Marjorie Gestring, who worn the gold at the 1936 Summer Olympics in Berlin.