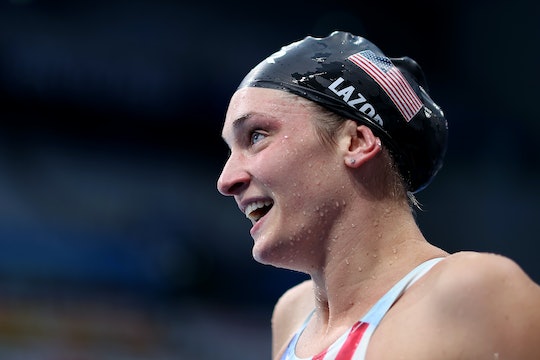 Annie Lazor Was Thinking Of Her Dad, Who Died 3 Ago, As She Won An Olympic Medal

“He was the most selfless, humble and generous man I’ve ever known.”

When swimmer Annie Lazor won her bronze medal in the 200-meter breaststroke at the Tokyo Olympics on Friday, it was an emotional moment for many reasons. It was Lazor’s first Olympic medal, she was swimming against friend and fellow U.S. swimmer Lilly King, who immediately embraced her after she herself won silver, and she was still grieving over a tragic loss that happened just three months before. After winning her medal, Lazor reflected on her father’s death in an interview with TODAY and said that she was thinking of him.

“I thought of him not a lot before I swam, but a lot after I swam,” she said. “I kind of had a minute to sit to myself today and just thought he would only care about the result because I cared about the result.”

Lazor’s father David died suddenly in April at his home in Michigan, reportedly due to Covid-19, according to ESPN, leaving the family in a state of shock. David Lazor’s obituary noted that he “absolutely shined” in his role as dad to his three children, including daughter Annie. “He was her ardent cheerleader — win or lose, he always let her know that she is so much more than her athletic accomplishments,” it read. “Their weekly phone calls delighted him and he adored just listening to her talk about her life.”

The 26-year-old swimmer shared a beautiful tribute to her late dad in May on Instagram, writing in part, “We laid my sweet, sweet dad to rest on Friday. We will never ever know why this happened; but we do know that he was the most selfless, humble and generous man I’ve ever known.”

Annie Lazor lost her father before the Olympics.

His loss left Lazor struggling to continue training for the Olympics, but with the help of her friend and 2016 gold medalist Lilly King, she persevered. King drove five hours to Lazor’s family home in Michigan to encourage her to keep going. “She has been there for me in ways I can't even describe — words kind of fall short, to be quite honest — she is my family outside my family," Lazor told reporters after her win, according to ESPN. “The last few months for me have been far from easy, but she has dragged me through the mud and pushed me every day and distracted me, and before we got up for the 200 breast, she told me she loved me, and let's just do this, and that was all I needed to hear.”

Now that Lazor has won a bronze medal, she nows exactly how her dad would react if he were here with her, “He just loved watching me do what I love,” she told E! News, “so whether I got third or last today or broke a world record, he just would have loved to see me afterwards and get a nice meal with me.” He would be incredibly proud of her. Just like the rest of the country.