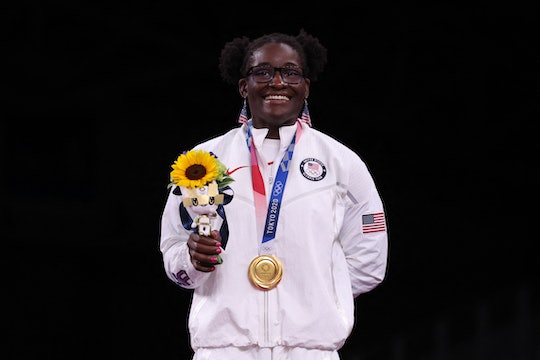 “I made a promise to her and she loves cooking.”

Tamyra Mensah-Stock, the first Black woman to win an Olympic gold medal in wrestling for Team USA, is taking her own success to help her mother fulfill her dreams. Using the $37,500 she will receive in prize money following her historic win at the 2020 Tokyo Olympics, the 28-year-old athlete plans to purchase a food truck for her mom, Shonda Wells.

“So my mom’s gettin’ her food truck!” she announced during a news conference after winning against Nigeria’s Blessing Oborududu. “She’s gonna have her little cooking business. She can cook really, really, really well. Barbecue!” What’s more, the women already have a name for the food truck: The Lady Bug.

Mensah-Stock told People the idea of getting her mom a food truck was sparked five years ago as she would make and sell food out a portable grill. “I made a promise to her and she loves cooking,” Mensah-Stock told People of her food truck plans. “It's just one of her passions. Growing up, we'd be like, 'Ooh, mommy, you put your back into this food. Like you literally put your foot in it.”

Mensah-Stock has called her mother “the strongest woman” she has ever known. When Mensah-Stock was in high school, the Olympian shared with People that her father was killed in a car accident while he was traveling from one of her wrestling matches. Since then it’s been her and her mother. “She's always doing back-breaking work and ... I've just seen her struggling ever since my dad died and I don't like seeing it,” she told the magazine.

Although the Chicago native is putting the funding behind it and can vouch for her talent in the kitchen, Mensah-Stock will not be eating any of mom’s food. “I don’t eat it ‘cause I’m a pescatarian now,” she told reporters in Tokyo. “It is going to be pleasant. It's going to be legal. It's going to be fun.”