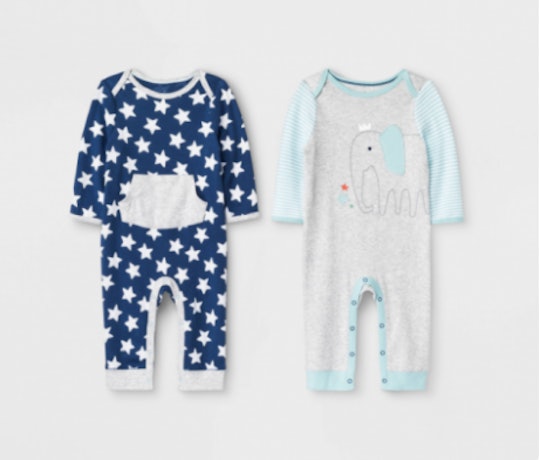 Here's what parents need to know.

If you've been shopping for new clothes for your little ones recently, you might want to check the labels. On Dec. 30, Target announced a recall on thousands of infant rompers and swimsuits from two popular brands — Could Island and Cat & Jack — due to a choking hazard.

The U.S. Consumer Product Safety Commission (CPSC) announced on Dec. 30 that Target has recalled a variety of Cloud Island infant rompers because "the snaps can break or detach from the rompers, posing a choking, laceration and pinching hazards to children." There have been 16 reports of the snaps breaking or detaching, as well as one report of a child being pinched and another being scratched.

Rompers included in the recall were sold in sizes newborn to 12M, and sold at Target stores nationwide and online at Target.com, GoogleExpress.com, and Shipt.com for around $10 for a single romper and $12 for a set of two. Approximately 299,000 of these Cloud Island infant rompers were sold between July 2019 and October 2020. To find out whether or not your child's romper was included in the recall, visit Target's recall page for the product numbers, which are located on the white tag inside the collar.

Consumers who purchased these rompers are being instructed to take them back to Target for a full refund. If they were purchased on Target.com, contact the store for a prepaid return label in order to return the items.

Rompers were not the only infant items to be recalled at Target in December. Approximately 181,000 Cat & Jack "Summer Blue Lemon" one-piece rash guards were recalled on the same day, citing potential choking hazards and lacerations from the snaps which can break and detach from the suit. Cat & Jack one-piece rash guards were sold at Target and Target.com for $15 between December 2019 and October 2020. The CPSC notes that the recalled rash guards were sold in infant and toddler sizes from 12M to 5T, and the product number can be found on the white tag on the inside collar. You can find more information on Target's recall page.

In this case, 27 reports of snaps detaching and breaking were shared with the CSPC, and one report of a laceration. Customers can bring these one-piece rash guards back to Target for a full refund or reach out for a prepaid return label if purchased at Target.com.