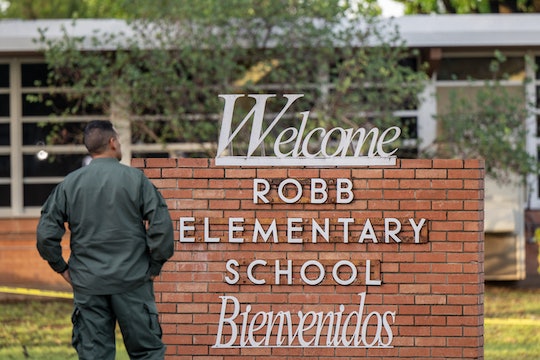 Two teachers killed in a senseless attack at Robb Elementary School in Uvalde, Texas are being remembered as heroes in one of the deadliest school shootings since the Sandy Hook massacre in 2012. Eva Mireles and Irma Garcia, who taught together for five years, were murdered on Tuesday when a lone gunman opened fire inside the school, also killing at least 19 children.

Eva Mireles was a dedicated teacher, wife, and mother.

Mireles’ aunt, Lydia Martinez Delgado, told The New York Times about the heroic last moments of her niece and said that she died trying to protect her students from the gunman. Delgado said her niece was “very loved” and was “the fun of the party.” Delgado also posted on her Facebook that she was “waiting for all facts,” but confirmed that her niece was one of the victims. “One thing that’s certain is that my beautiful niece did not survive this cowards [sic] actions,” she wrote.

Mireles was a fourth grade teacher. She was a wife, mother of one, and an avid hiker and educator for 17 years, according to her teacher’s bio on the school’s website. “I have a supportive, fun, and loving family, which includes a UCISD officer (Ruiz), college graduate daughter (Adalynn), and 3 furry friends (Callie, Kane, & Koda),” Mireles wrote in her bio. “I love running, hiking, and now you just might see me riding a bike!!”

Mireles’ daughter, Adalynn Ruiz, posted a lengthy message on her Facebook, thanking her mother for “being the best mom anyone could ask for.”

“I don’t know how to do this life without you, but I will take care of dad,” Adalynn posted. “I will take care of our dogs and I will forever say your name so you are always remembered, Eva Mireles, 4th-grade teacher at Robb Elementary who selflessly jumped in front of her students to save their lives. My heart will forever be broken. My bestfriend, my twin was taken from me.”

The mother of one of Mireles’ students called the teacher “beautiful” and “dedicated” in a tribute shared on Twitter. “My daughter’s beautiful teacher was the teacher who was killed in Uvalde, TX. Eva (Ms Mireles) taught Gabby in elementary school,” the tweet read. “She was a beautiful person & dedicated teacher... There are no words.”

Irma Garcia was a devoted teacher, wife, and mother of four.

Irma Garcia, a mother of four and fourth grade teacher, also died trying to save students from Tuesday’s massacre, NBC News reported. One of her sons told the news outlet that an officer on the scene saw Garcia “shielding” students.

Garcia taught at Robb for 23 years, including five alongside Mireles. She was married for 24 years and was the mother of two sons and two daughters, according to her bio on the school’s website. “I love to BBQ with my husband, listen to music, and take country cruises to Concan,” she shared in her bio.

Garcia’s nephew, Joey, wrote on Twitter that his aunt “sacrificed herself protecting the kids in her classroom.” He added, “she died a HERO. she was loved by many and will truly be missed.”

In the aftermath of Tuesday’s horrific attack, Robb Elementary School has started a memorial fund to help the victims and their families.

More Like This
Robb Elementary School Is Set To Be Demolished After Deadly Shooting
Can States Ban The Abortion Pill? FDA Rules May Make That Hard
Chris Evans Has Choice Words For Critics Of The Same-Sex Kiss In 'Lightyear'
AAP Now Recommends Mothers Breastfeed For 2 Years Or More In New Guidelines