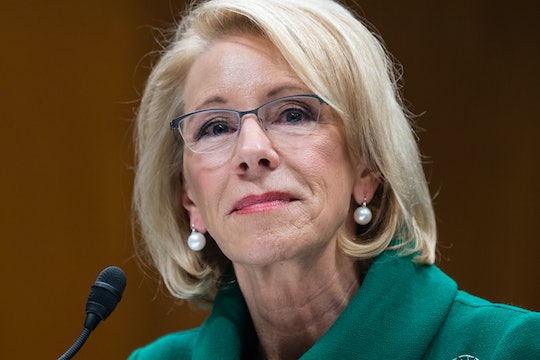 Teachers Are Responding To Betsy DeVos Resigning & They're Not Holding Back

Talk about a major two weeks' notice. Lots of reaction has been buzzing about Betsy DeVos' resignation, especially among teachers. The Education Secretary submitted her resignation on Thursday, Jan. 7, following the violent mob attacks on the US Capitol.

In her resignation letter addressed to President Donald Trump, DeVos cited the Capitol breach as her reason for resigning and called the mob's behavior "unconscionable". She added that it was no mistaking that his behavior [the president's] impacted "the situation, and it is the inflection point" for her as well.

"Impressionable children are watching all of this and they are learning from us," she wrote in her resignation letter. "I believe we each have a moral obligation to exercise good judgment and model the behavior we hope they would emulate. They must know from us that America is greater than what transpired yesterday."

News of DeVos' resignation was somewhat music to a few political figures' ears, such as former educator Sen. Elizabeth Warren.

"Betsy DeVos has never done her job to help America’s students. It doesn’t surprise me one bit that she’d rather quit than do her job to help invoke the 25th Amendment," Warren tweeted on Thursday.

"Good riddance, Betsy," she addressed Devos directly. "You were the worst Secretary of Education ever."

Warren and other political figures have been strong critics of DeVos throughout her tenure. In 2019, Warren, Rep. Ayanna Pressley (D- Massachusetts) and Rep. Katie Porter (D- California) penned a letter to the education secretary to address their concerns about DeVos' income-share agreements. The arrangement would allow investors — such as colleges and private entities — to front a student’s tuition in exchange for a percentage of their future income.

Here's What Educators Are Saying About DeVos' Resignation...

So far, the reaction to DeVos' leaving has been a long-overdue sigh of relief. The billionaire caught a lot of heat from teachers union for her controversial policies on school choice and her support over private schools than public education.

The American Federation of Teachers, an organization and public school advocate that clashed with DeVos over the years about school choice released a short, simple statement to her departure on their Twitter.

"Her complicity, cowardice, and complete incompetence will be her legacy," Pringle tweeted.

Instagram memes that say, "Bye Betsy, Sincerely, Teachers" has been floating around as early as last November, shortly after he presidental election.

An Alabama special education teacher shared a screenshot of an AP post about the resignation on her Instagram.

Meanwhile, others such as CNN commentator and former professor Keith Boykin sees DeVos' resignation as a cop-out to avoid facing accountability for her wrongdoings.

"Betsy DeVos stood with Donald Trump from the very beginning," Boykin tweeted. "She doesn't get to resign 13 days before he leaves office and absolve her guilt. She is complicit in every lie and scandal associated with the Trump administration."

DeVos was selected as Trump's head of the Department of Education in 2016.