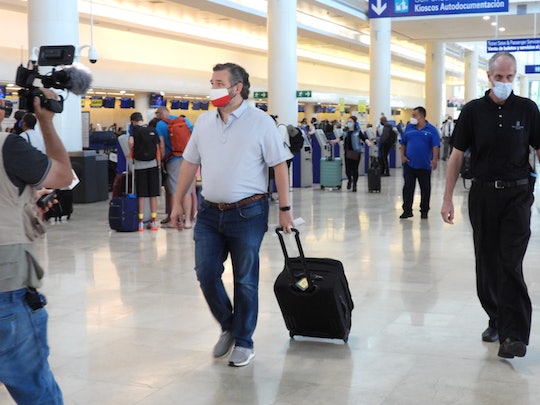 "brb gotta drop my middle schooler off at the Maldives."

While the state of Texas is struggling with a crippling winter storm that's left millions without power, Sen. Ted Cruz flew to Cancun with his daughters. And when photos of him on an airplane traveling to the tropical Mexican city started circulating on social media — as Texans try to stay warm in houses without power or heat — the Republican Texas senator released a statement saying he was just trying to be a "good dad."

"With school cancelled for the week, our girls asked to take a trip with friends," his statement read in part. "Wanting to be a good dad, I flew down with them last night and am flying back this afternoon."

Cruz's oldest daughter Caroline is 12 years old, while her little sister Catherine is 10. Not exactly the age when most children are able to make big decisions about traveling during a pandemic and a statewide emergency situation that's left dozens of people dead.

A day before he released his statement, Sen. Cruz was captured on camera boarding a flight to Cancun from Bush Intercontinental Airport, and the footage went viral immediately. Particularly after it was shared by Texas Rep. Gene Wu on Twitter. "Guess which US Senator from Texas flew to Cancun while the state was freezing to death and having to boil water?" Wu tweeted.

On Thursday afternoon, the traveling senator confirmed he had, indeed, left the country during a crisis in his home state. This was after Cruz made statements during a radio interview on Monday advising worried Texans to stay home and not "risk it." He added, "Keep your family safe and just stay home and hug your kids."

Needless to say, Twitter is really having a field day calling out Cruz for his behavior and his attempt to lay the blame at the feet of his daughters. Take comedian Ashley Nicole Black, who took Cruz to task for his utter hypocrisy, writing sardonically: "I’m sorry, but if you’ve never dropped your kids off in Cancun for a play date during a pandemic and a humanitarian crisis in your home state that’s probably because you’re just a liberal Hollywood elitist with no values."

Hend Amry poked fun at the concept of just quickly dropping off middle school-aged children in another country. "brb gotta drop my middle schooler off at the Maldives," she tweeted.

Meanwhile another tweeted, "Ted Cruz blames his daughters for his getaway to Cancun I, too, blame my future kids for all my disastrous decisions."

There were lots of tweets from people who were shocked that Cruz would actually blame his behavior during the storm on his children. Like founder of Mom's Demand Action for Gun Sense in America Shannon Watts, who tweeted, "We knew he’d blame someone - didn’t expect it to be his daughters. No apology. No remorse. No accountability."

One social media user called out Cruz for throwing his daughters "under the bus."

TV writer Bryan Behar made a good point: "In the future, if your excuse begins with 'I wanted to be a good dad,' it shouldn’t end with 'it was my daughters’ fault.'"

And one eagle-eyed Twitter user noted that Cruz, who was seen ready to board a flight home on Thursday, had a lot of luggage for someone just staying overnight for a quick drop-off.

Ted Cruz flew to Cancun during a winter storm.

Also, Cruz's recent explanation that the decision to fly to Cancun after school was canceled was called into question by some Twitter users. Particularly since schools decided to close as a result of the winter storm that has been making life difficult for millions. "They canceled schools for a reason, the same reason most of the state is with out power or water, can somebody be more stupid than that," one person tweeted.

Finally, Texas Rep. Chris Turner had a message for Cruz during an interview with CNN. "As far as I'm concerned, it would be fine if he remained in Cancun," Turner said. "He doesn't do anything for us in Texas or in Washington, so I don't know that we're gonna notice when he comes back."