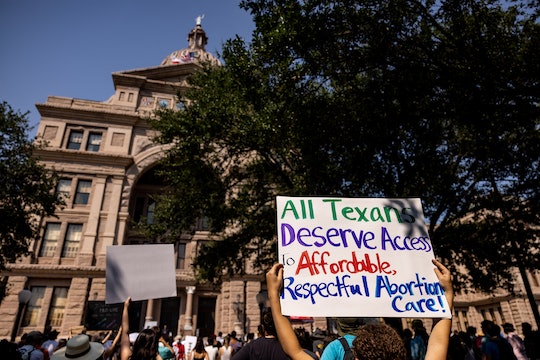 The new law allows those who “intentionally, knowingly, or recklessly” breach it to be charged with jail time.

Less than a month after a law banning abortion after six weeks of pregnancy went into effect in Texas, state legislators have passed a new anti-abortion bill, this time focusing on limiting medication abortions. Texas Gov. Greg Abbott has signed a new bill into law, which bans abortion-inducing drugs like mifepristone and misoprostol from being used in the state seven weeks into a pregnancy. Reproductive rights advocates have consistently called medication abortion safe and effective.

Under Senate Bill 4, which Abbot signed into law Friday, only physicians can provide abortion-inducing drugs and only to pregnant patients who are not more than 49 days, or seven weeks, into their pregnancy. The law also prohibits individuals, including physicians and drug manufacturers and suppliers, from providing abortion-inducing drugs through the mail or via delivery or courier services.

While the law does note that a pregnant woman on whom a drug-induced abortion is attempted or performed after seven weeks of gestation is not criminally liable, “a person who intentionally, knowingly, or recklessly violates this subchapter commits an offense” defined under the law as a state jail felony. Those found to have violated the law will be subject to a fine of up to $10,000 and a jail sentence of up to two years.

Legislators behind Senate Bill 4 have claimed their efforts to limit medication abortions stem from a desire to protect women’s health. “This state has an interest in protecting the health and welfare of every woman considering a drug-induced abortion,” the text of the bill reads. “The use of Mifeprex or mifepristone presents significant medical complications including, but not limited to, uterine hemorrhage, viral infections, abdominal pain, cramping, vomiting, headache, fatigue, and pelvic inflammatory disease; and the failure rate and risk of complications increases with advancing gestational age.”

Abortion providers and reproductive rights advocates, however, have long argued that medication abortions are a safe, effective, and non-invasive way to end a pregnancy up until 10 or 11 weeks of pregnancy (meaning 70 or 77 days after the first day of your last period). According to the Guttmacher Institute, medication abortions made up more than one-third of all abortions performed in the United States in 2017. Medication abortions are generally performed using mifepristone and misoprostol, which was approved by the U.S. Food ad Drug Administration (FDA) in 2000.

Of course, Senate Bill 4 isn’t Texas' first effort to severely restrict abortion access and care in the state. Earlier this month, a controversial law banning abortions at just six weeks — a time before many people are even aware they are pregnant — took effect in the state after the U.S. Supreme Court failed to act on emergency appeals filed by the state’s abortion providers and reproductive rights advocates.