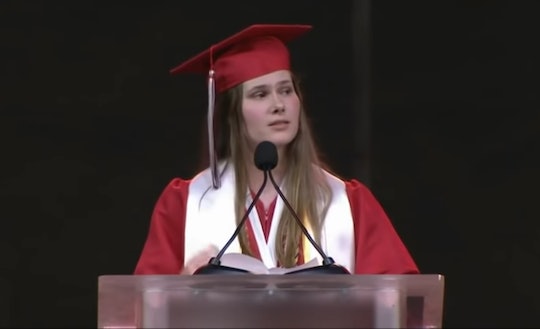 “I cannot give up this platform to promote complacency and peace when there is a war on my body and a war on my rights.”

“As we leave high school, we need to make our voices heard.” So began Paxton Smith’s high school valedictorian speech. The 18-year-old Dallas resident had intended to talk about media and television content at graduation, a subject that’s “very important” to her, in a speech that had been approved by Lake Highlands High School. But Texas had recently passed SB-8, the so-called “heartbeat bill” barring abortion after the detection of fetal heartbeat, and Smith knew she couldn’t stay silent on the matter.

Pulling a piece of paper from her robe as she stood at the podium, she used her platform to speak against the bill as “dehumanizing,” and “gut-wrenching.”

“I have dreams and hopes and ambitions,” she said. “Every girl graduating today does. And we have spent our entire lives working towards our future. And without our input and without our consent, our control over that future has been stripped away from us.”

SB-8, signed into law by Republican Gov. Greg Abbot, requires abortion providers to check for a fetal heartbeat, which can occur as early as six weeks gestation, before an abortion is performed. According to a 2016 study published in the Maternal and Child Health Journal, the average American woman discovers she is pregnant at approximately 5.5 weeks gestation. Under this new law, Smith points out, many women will not know they’re pregnant in time to make a choice whether to continue their pregnancy.

Texas is the latest to join a growing number of Republican-led state legislatures to enact increasingly restrictive abortion bans. Idaho, Oklahoma, and South Carolina have passed similar “heartbeat bans.” Earlier this year, Arkansas Gov. Asa Hutchinson signed SB-6 into law, which bans abortion “except to save the life of a pregnant woman in a medical emergency.” Many experts see these new laws as attempts to overturn Roe v. Wade by bringing their cases to a now conservative-majority Supreme Court.

While none of these bans are enforceable yet (Texas’ SB-8 will go into effect in September, barring stays and court challenges), Smith felt the urgency. “This is a problem,” she told her audience. “And it's a problem that cannot wait.”

You can watch Smith’s speech in its entirety here.

In an interview with local ABC affiliate WFAA, Smith said she’s been surprised at the response she’s received from the speech, which she did not expect to be able to finish. “I thought that the microphone was going to get cut off a couple minutes in, but it didn’t.” Not only did she receive applause and cheers at graduation throughout, but on social media as well, including from former Secretary of State Hillary Clinton. “This took guts,” she tweeted, sharing an article on Smith’s “switcheroo” from Dallas Magazine. “Thank you for not staying silent, Paxton.”