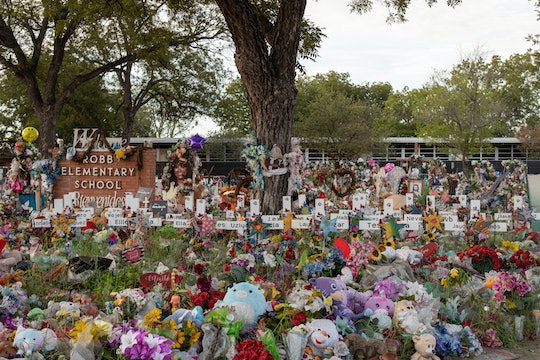 Texas Sends Out DNA Kits To ID Kids' Bodies, Because That's The World We Live In

The program was initiated the same year Texas loosened restrictions on gun ownership.

Lots of items come home with students from school — permission slips for field trips, art work, half-eaten lunches, interesting rocks found on the playground. But over the past week, something more unusual was sent home to Texas families. In accordance with a 2021 law, S.B. 2158, families of Texas students from kindergarten to eighth grade were given DNA and fingerprint identification kits. While the language of the law cites the reason for the kits “to help locate and return a missing or trafficked child,” some lawmakers have acknowledged what has otherwise remained unspoken: that the kits could also be used to identify children’s bodies in the event of a school shooting.

The implementation of S.B. 2158, which is seen by many as a reaction to the 2018 Santa Fe High School shooting that left 10 dead, comes just months after a gunman murdered 19 fourth graders and two teachers at Robb Elementary School in Uvalde, Texas. In some instances, the injuries sustained were so profound that bodies had to be identified not by facial features but DNA samples. (This is not uncommon with close range injuries from a gun like an AR-15, as sustained by the victims in Uvalde and Newtown, Connecticut.)

Participation in the program, which was created in partnership with the Federal Bureau of Investigation (FBI), is voluntary, the Dallas Morning Tribune reports. Moreover, the kits, which are being distributed via the Texas Education Agency (TEA) is to be held by parent or guardians at home and will only be handed over to officials in the case of an emergency where this information could be helpful.

While Gov. Greg Abbott praised the passage of the bill in 2021, many on social media have expressed anger and dark humor in regard to identification kits.

“I had a lot of feelings about getting this in the mail,” tweeted @DCarlisleTX along with an image of the kit. “It feels like the state is giving up on keeping our kids safe. Unacceptable. #BetoForTexas.”

“Yeah! Awesome!” responded Brett Cross, the father of Uziyah Garcia, who died at Robb Elementary. “Let’s identify kids after they’ve been murdered instead of fixing issues that could ultimately prevent them from being murdered. It’s like wiping your ass before you take a sh*t.”

“Disgusting abdication of responsibility for the welfare of our children and citizens,” tweets @RomyNGoldberg. “We got ours in the mail and the intense feelings of rage and impotence are indescribable. How is this acceptable. How.”

Since 2012, Texas has endured the most school shootings of any state in the country. Texas also has some of the least restrictive gun laws in the country as well. In 2021, the same year Gov. Abbott signed S.B. 2158, he also signed a H.B. 1927, a bill that ended the requirement for Texans to obtain a license to carry handguns, eliminating most restrictions on the ability for anyone over 21 to carry handguns. Abbott has said that he wishes for the state to be a “Second Amendment sanctuary state,” with “a complete barrier against any government official anywhere from treading on gun rights in Texas.”

More Like This
Over 10,000 Sippy Cups & Bottles For Toddlers Recalled Due To Lead Poisoning Hazard
Hero Who Tackled Colorado Gunman Was At Nightclub With Family To See Drag Show
This Year's White House Holiday Decor Features Wooden Cutouts Of The Biden Family's Pets
Viral Reddit Post Asks If A Toddler Can Watch Cartoons Without Headphones On A Plane