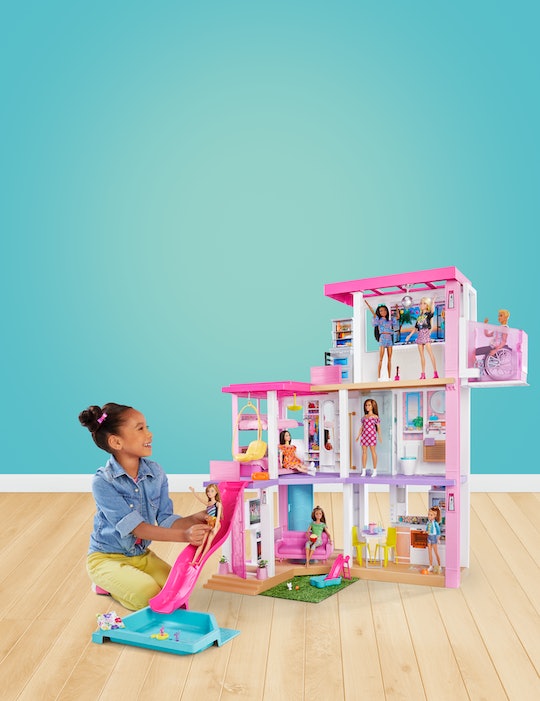 The New Barbie DreamHouse Is An Inclusive Party

And The Home Edit has some ideas on how to keep it Barbie-perfect.

My conversation starts with The Home Edit — Joanna Teplin and Clea Shearer — the way so many have started over the last 14 months. I was expecting an audio-only interview, and suddenly there they were on my screen, every bit as bright and lively as I’ve come to expect from their Netflix show and Instagram stories. I think the first thing I shouted at them was, “Oh no! I thought this was audio only!” and basically made a screeching noise that broke sound barriers.

“You know what, nobody needs to see our faces either. Let’s turn these cameras off,” Clea and Joanna graciously suggested, and we began. The two are famous for their impeccable organizing — clear storage containers and rainbow order are two things everyone recognizes from The Home Edit — but today, we’re talking about another renowned home style: the Barbie DreamHouse.

Barbie herself is iconic, and all of her accessories and estate pieces are, too. From Barbie’s campers and hot pink corvettes to the three-story DreamHouse, her “properties” are every bit as awe-inspiring as her closet full of astronaut gear, evening gowns, and presidential suits. Barbie can be anything — and so can her home. Especially with this year’s new DreamHouse.

I ask Clea and Joanna what they love most about the new 2021 Barbie DreamHouse and they are gushing. “The details! So many good details!” they both tell me. Since 1962, Barbie’s DreamHouse has gone through some major changes (12 to be exact), but this year’s is the most customizable DreamHouse yet. She now has sounds and lights (“There’s actual electricity,” Joanna and Clea gush), plush grass and blankets, a party room with a light-up DJ stand and outdoor BBQ that also transforms into a dessert buffet, and modular elements that can be customized for a new look (like moving the grass upstairs and moving the pool and slide into new positions to maximize space).

And a big bonus: the Barbie DreamHouse’s new elevator is ADA-compliant. At the 2020 Toy Fair, Barbie unveiled that all of Barbie’s estate pieces would now be wheelchair-accessible, and this year’s DreamHouse proves it, with an elevator that has a ramp and plenty of room for Barbie or Ken in a wheelchair to access the DreamHouse. “We love an inclusive DreamHouse,” Clea tells me.

My own 6-year-old Alice is obsessed with her Barbie DreamHouse. There is always a party happening, there is always a wailing baby somewhere that Barbie needs to take care of, and, for whatever reason, there is almost always a tropical storm that comes through and knocks all of Barbie’s furniture and tiny accessories to her bedroom floor. Keeping up with it is a lot of work, but I tell Clea and Joanna that’s one of the reasons why I love how big the DreamHouse is — optimal storage.

“I honestly just throw a lot of it back into the rooms,” I tell them. “The DreamHouse itself is a great storage piece. Especially the pool.”

“Oh the pool is great,” they say. But when I mention things going up the vacuum a lot more than I’d like them, too, they have some other ideas.

“Do you have a spare drawer anywhere? That you can use for tiny things? That’s what we do,” Joanna says. “We have a drawer and little baby bins for all the accessories.” Clea agrees, suggesting that the little bins are actually so cute, they’re kind of fun to put away, and they stack, too. “It’s an easy way to keep it out of the vacuum.”

While The Home Edit is known for their meticulous organizing — Have you seen those pantries separated into dinner, snacks, baking, and more categories? — it’s not something they really recommend for Barbie and all of her accessories. (Unless your kid wants it that way.) I tell them about the cute, tiny details I want to keep up with, like the tiny marshmallows on roasting sticks for s’mores in the Barbie camper and they know exactly what I mean.

“I’m telling you, when my daughter cleans it up at night, she has a very specific — I’d even say ritualistic — way of organizing the s’mores on top of the camper,” Joanna says. “She’s very particular. I’m like, ‘I can help’ and she’s like, ‘No, Mom, it goes a certain way.’”

But when it comes to your own general mental health and ease, you don’t have to get too focused. “Don’t worry about getting too fussy. Joanna’s daughter obviously has a s’mores system we don’t want to get in the way of, but generally speaking, if it’s all grouped somewhat together and your daughter has an easy way of finding everything, that’s what we want. Get it up off the ground, keep it contained,” Clea says. She suggests stackable shoe boxes, which are really lightweight and easy for kids to open and clean up, and finding space somewhere to keep it all. “A corner, a cubby, a bookcase, whatever it is.”

There have definitely been times where I’ve gotten a little too laser-focused on the organizing. I can’t put the astronaut suit right next to the stilettos, are you joking? And how can Barbie’s giant telescope hang out in the same room as her sewing machine and presidential podium? (“You can’t,” Clea and Joanna say. “It’s impossible to maintain.”) But the thing about Barbie and her DreamHouse is that the opportunities for growing and imagining and being are endless. You can put things everywhere! She can work as a pediatrician downstairs, a farmer in the backyard, and have a formal gala in her third story DJ booth.

And then you can throw everything back in the bins.