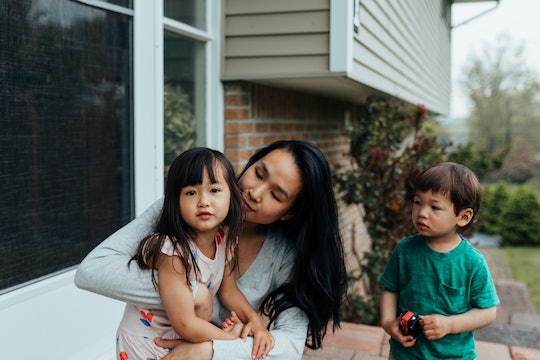 It was only ever $50. That’s all it took most of the time. To get from Wednesday to Friday or Friday to Monday.

It was only ever $50. That’s all it took most of the time. To get from Wednesday to Friday or Friday to Monday or over the hump of a day or two. The perfect amount for a good night of sleep. Enough to put $10 of gas in the car which gets you back and forth to school for two days. Enough for a few groceries, toilet paper, maybe even a last-minute field trip to the museum that you weren’t expecting. It is amazing to me how $50 is enough so many times. How $50 never stops being enough for a day or two even with inflation and kids who get bigger and bigger.

It was enough the first time when my kids were still little and it was a Friday and I was supposed to get paid but no, not until Monday. I cannot remember why I had to wait until Monday but I can tell you that there were 72 hours of eating and needing ahead of me that I wasn’t expecting. A weekend when my kids would not be going to their dad’s to eat pizza pockets and pancakes and apples cut up in little Ziplock baggies and would instead be needing those things from me. All things I was happy to provide with my paycheck that was not coming.

I had people to borrow money from; in this way, I was luckier than a lot of single moms I knew. I had a mom, an aunt, a cousin. I was in various levels of debt to all of them for electric bills, oil changes, the legal fees so I could keep my kids. I couldn’t ask. Not any more. Not for something so small as a weekend of groceries. I couldn’t hear that awful heartbeat of a pause on the other end, their voice caught on trying not to tell me they were so tired of me and who could blame them? So disappointed. The light questions about child support, the sideways suggestions about a different job.

The kids were at school, lunches packed with just about the last of the food from our cupboards. I had six hours to find money. And so began my personal version of the Sisterhood of the Traveling Pants, except it was just two single moms and a $50 bill.

That day I walked down the hill to my friend’s apartment to ask for advice. A single mom of one daughter, a fellow server, a collector of second-hand everything. She was sitting on her stoop drinking a tea and waiting for me. She loaned me $50 for the weekend on the spot. Had it in her tip jar on her kitchen counter, explained that she could just about manage to go without $50 for the weekend because her own daughter was visiting her dad. At first I thought $50 was not enough but I said thank you because I knew, I knew it cost her something.

It was exactly enough.

I bought apples bananas and cereal and milk and frozen vegetables and ground beef and tomato sauce and bread. I kept $5 in change for our Saturday morning walk so they could pick out penny candies from the toy store. We made it through. And the best part was it was easy to pay back. Not like the money for the electricity bill or the car repair or the legal fees. Insurmountable bills that never seemed to get paid down even when I tried. Fifty dollars, I told my friend, saved us for the weekend. I slept soundly, my belly full of some casserole concoction that everyone ate up for once without complaint. I handed her that $50 like it was nothing at all even though it was everything.

Three weeks later, I loaned her a $50 bill on a Wednesday. She walked up the hill to ask me because it just felt better in person. Her daughter had a school trip coming up, a full day at a theme park. She had earned the trip by helping out in the kindergarten class on lunch breaks and monitoring the little kids crossing the street after school. She had earned that trip, her mom told me, but still she had to pay for some of it at least. And so I loaned her my own $50 that I had made in tips the night before. It didn’t feel like a lot of money to give up, not enough to worry about if she wasn’t able to pay me back right away.

Field trips, late paychecks, gas running low, Thanksgiving dinners, last-minute visits from family. Small emergencies that were never enough to topple us but just enough to make one of us feel like we were slipping.

I made us both a coffee and we went out in the backyard to talk about other things after she folded that $50 into her pocket. Overlapping customers we both hated or loved. A sale at the local thrift store. Eyebrows. There was no disappointed intake of breath. No recrimination. No judgment, that’s what I want to say here. Just $50. Just a problem solved as easy as wiping a crumb off of someone’s upper lip.

It went on like this for about two years. Field trips, late paychecks, gas running low, Thanksgiving dinners, last-minute visits from family. Small emergencies that were never enough to topple us but just enough to make one of us feel like we were slipping. That $50 making its way up and down the hill between our homes, a lifting between us.

I asked other friends once or twice when I was in a bind. Friends with dining rooms and matching dishes. With fenced-in backyards, with snow tires on their cars, with savings plans. Friends who had $50 plus more and more and more. Good friends who made good decisions. Who had good lives.

And I loved them and knew they were kind but oh the lack of grace was always there when I had to come to them with my head bowed. How they saw me differently all of the sudden. My life a surprise to them, a shock that I might not be like them. My need a naked thing between us that would never really be clothed again. All for $50.

This was the true gift between my friend and me. Not just the perfect, reachable lifeline of $50 but the dignity it gave us both. The reminder that we didn’t always just need help. That our heads were not always bowed with shame or want or need. That we too could help. That we could sometimes be the one to give back a little dignity that cost us so little. From where I sit now, I see how little it really cost me, cost her, cost my kids, cost my friends. Just $50. It was always only $50.