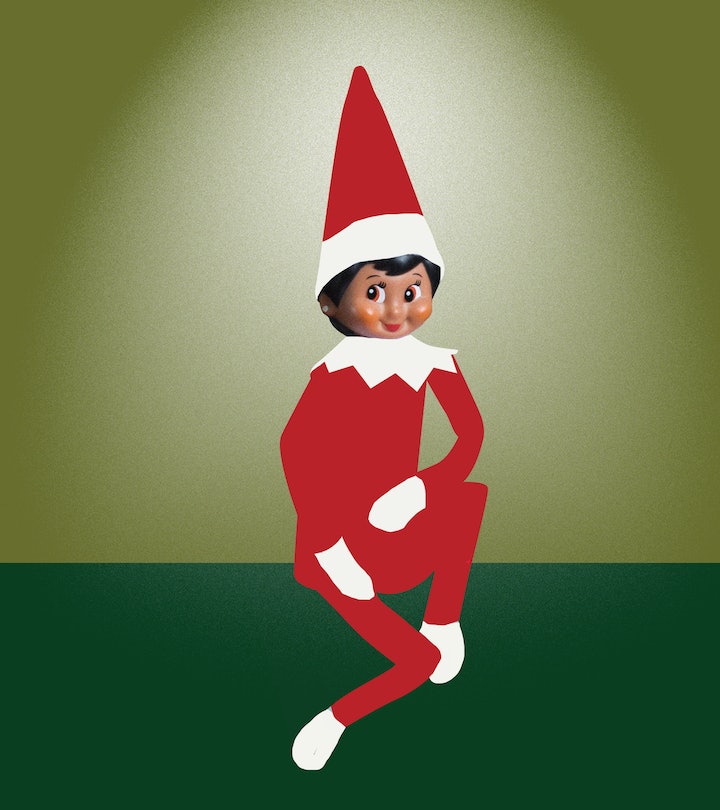 “Go easy on yourself.”

There are few things more polarizing during Christmas than The Elf on the Shelf. Some parents love it, some parents hate it, some parents are indifferent entirely. Amongst those who hate it, the two main reasons seem to be either that it’s A) just another thing to stress and worry and feel guilty about during Christmas (because clearly you aren’t making enough magic for your kids) or B) a demon sent straight from the depths of hell to destroy your house, encouraging you to set your kitchen on fire so that it looks like your Elf tried to roast marshmallows and failed.

But that’s not what the creators of The Elf on the Shelf intended. In fact, despite the many, many Facebook memes suggesting that whoever created Elf on the Shelf just wanted to make moms feel bad at Christmas, the opposite is true. Chanda Bell, co-CEO of the Lumistella Company and co-author of the original Elf story, The Elf on the Shelf: A Christmas Tradition, created The Elf on the Shelf with her mom Carol Abersold and sister Christa Pitts based off of their own family traditions. When Bell was a little girl, Santa sent an elf to her own home to watch and report on what she and her sister and brother were up to all day before flying back to the North Pole. Her childhood elf wasn’t a mischievous one — he just landed in a different spot each morning, and Bell and her siblings would find him.

This childhood tradition became the entire premise for The Elf on the Shelf brand, but over the years, many parents have added their own — often very elaborate — spin to their Elf on the Shelf visits. (Like the many elves that come in to just destroy the house each day, while other elves leave gifts and notes.) But Bell tells Romper that, no matter what, the whole point of The Elf on the Shelf really is just about magic, which looks different for every family.

Here, Bell talks about the joy of making Christmas memories, her favorite part about being a mom at Christmas, and why you really don’t need to feel pressured to have your elf cover your kitchen in flour.

The Elf on the Shelf can be a polarizing topic: many parents feel like it's just more work to do during a busy season. What would you say to those parents?

A good tradition is something that is unique to your family. We tell people all the time that the elves match the personality of their family. So while some elves are very creative or silly or fantastical, others don't do more than land in a different spot when they return from the North Pole. The truth is that having an elf from the North Pole, regardless of how complicated or simple its mission for the day might be, is designed for kids to make a special family memory at Christmastime. My children never felt shortchanged by the fact that our elf was a little less creative than others, and to our kids it was just as magical and special.

I think it's really important that the elf interacts with the family in a way that is designed to be precious for the kids and not about competing with the elf next door.

What do you think of the elves that make big giant messes in their family’s homes?

I think if those types of elvin situations create magic for a family at Christmas time, then I am all for it. But, I think it's really important that the elf interacts with the family in a way that is designed to be precious for the kids and not about competing with the elf next door.

What was your favorite Christmas memory as a child?

My favorite Christmas memories, outside of the elf who visited us, were of setting up luminary bags on Christmas Eve with my dad in our neighborhood. It was beautiful. I also loved the sights and sounds of the holiday. My mom always made the house feel very warm and cozy at Christmastime. Finally, I would say the year my sister and I got our blue bikes with baskets on the front. We spent all day outside learning to ride them.

The Elf on the Shelf is designed to be magical for your kids, but we all know that work often falls on the shoulders of mom. What’s your favorite part about being a mom at Christmas?

I am not sure there is any greater joy than experiencing the magic of Christmas through the eyes of a child. Outside of what I do for a living, watching the magic of the interaction of my own children with their own elves is something I will carry in my heart forever. The way they would talk to them sweetly, be thrilled at finding them, and even how they would talk about them year-round once they were gone, all make for precious moments and memories.

If you had one piece of advice/words of wisdom for moms at Christmas, what would it be?

I remember one time being so busy trying to own and run this start-up elf company for Santa Claus, that I got a Christmas tree up with lights, but only managed one sad ornament on the tree — and it was the homemade macaroni ornament my son brought home from preschool. At one point he looked at me and said, “The tree is so beautiful, Mom!” I look back at that moment and it was definitely not my high point as a mom, but I was busy building his future and it was just the best I could do.

So, my advice would be to slow down and take in every little Christmas memory, because they really do grow up so fast. I would also say, go easy on yourself. Kids have a way of filling in the gaps and using their imagination, even when we feel like we have failed as a parent in simple things like not decorating the tree or elf hijinks.