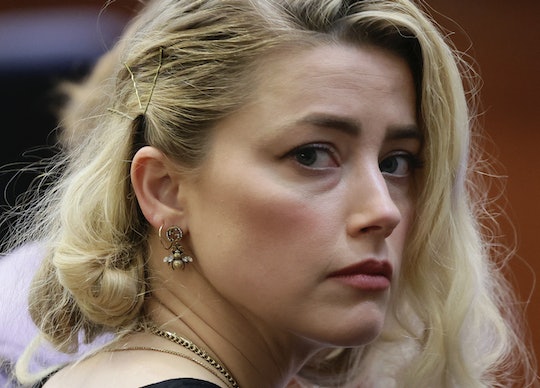 The first snippet from the Johnny Depp-Amber Heard defamation trial to cross my path several weeks back was a clip of the proceedings, remixed with a funny sound effect — something like a beeping, musical equivalent of “uh-oh!” In the clip, Johnny Depp, the movie star at the center of my formative teenage swooning years, is on the stand. He’s gamely — nay, earnestly! — trying to answer his attorney’s questions, but we can clearly see that the poor man can barely get a word in edgewise, beleaguered as he is by the constant and shrill cries of objection from opposing counsel. It’s edited to best show us how reasonable, how clever he is, chuckling to himself with that mischievous glint in his eye all but contained by his gentlemanly adherence to courtroom etiquette.

Though my days of Wino(na)-forever fever have long been tempered — especially by the grim 2018 Rolling Stone profile that painted the real-life Johnny in a very revealing light — I found the clips amusing. So charming, still, that man! Shades of Captain Jack! Later that very day, my teenage daughter asked my husband and I if we’d seen the videos. Much to my surprise, we both had, and we all three had a bit of a laugh.

“Did you hear she pooped in the bed?!” my daughter wanted to know.

“I don’t know, honey,” I said mildly. “There’s no way we can really know what went on in their relationship. And he strikes me as being a bit of a creep these days, honestly.”

I also pointed out that Heard was only in her very early 20s when she met Depp, who, at 22 years her senior, was a world class movie star to her unknown ingenue. I left it at that, for then. I thought I could tune out the rest of the sordid affair. But, as the trial wore on, the video snippets served to me so relentlessly by of every social media and news channel turned from Johnny Depp hero worship to the excruciating mockery of Heard. I started to grow sick to my stomach.

As of last September, TikTok boasted over 1 billion monthly users, with more that 138 million active users in the U.S. Over one-third of those people are ages 10 to 19. At a conservative estimate, that’s a cool 40 million children and teenagers on the app in this country alone.

The Depp Heard defamation trial started on April 11. By mid May, the hashtag #JusticeforJohnnyDepp had surpassed ten billion views on TikTok. In a Vice article exposing how much right wing media outlet The Daily Caller paid to fuel the anti-Amber frenzy, the outlet also reported that, “from the 4th of April to the 16th of May the Depp Heard trial amassed more social media interactions per published article than any other topic, including the Russia Ukraine war or reproductive rights.”

Now that the jury has spoken, nearly two months later, there is no way that any of the children and teenagers with access to TikTok have not been served at least several — but more likely hundreds — of videos smearing, mocking, or otherwise denigrating Amber Heard. There is no way that they have avoided seeing countless comments wondering “why Amber stayed” with her alleged abuser. No way have they missed the term “mutual abuse.” No way have they avoided videos dedicated to explaining why Heard is a bad example of how to be a domestic violence victim.

Of course, it’s not just TikTok; it’s everywhere — Instagram, YouTube, Facebook, Twitter, every news app. There is even Etsy merch. It’s inescapable, even if, like me, you actively tried to tune it out. Even if, like me, you cast a more skeptical eye over the propaganda that insistently filtered through, an eye that comes with age, with experience, with a broader understanding of the world and how these things work, one that most kids haven’t formed.

Today, as Depp’s “win” is gleefully celebrated by his legions of fans, a host of celebrities, and our very own GOP, whatever conclusions you have drawn, even against your better instincts, about what we can probably all agree was at best a toxic sludge of a marriage, the question really must be asked: What messages have tens of millions of kids and teenagers been absorbing?

We know what message current domestic violence victims are receiving. Maureen Curtis, vice president of criminal justice programs at Safe Horizon, a victim assistance organization, told EJ Dickson at Rolling Stone that “the verdict is ‘one more way of silencing survivors and taking away the one real option they may have’ by speaking out against their abusers in the media.”

“Indeed,” writes Dickson, “this seems to already be happening. Taylor says she has already been contacted by ‘hundreds’ of survivors wishing to retract public statements they have made in the press, or pulling out of court cases against their abusers. [Curtis] says the verdict ‘opens the floodgates’ for future defamation cases.”

“Survivors watching this will rethink everything they say out loud about what happened to them, and the potential of being sued and dragged through a court process for saying something they know is true, but they could be found guilty of defamation,” Curtis told Dickson. “It’s a scary place to be.”

The court of social media, of public opinion, is perhaps even scarier, if that’s possible. And of course, that court, like the actual legal system, is not reserved for celebrities and people with the kind of power and money that can insulate and protect, provide access to support. That court is where our little kids and tweens and teens spend so much of their time; it’s where they can become micro celebrities in an instant, where their influence and influences extend far beyond their own peer groups.

When I was a college student, not much older than my own daughter is now, the world discovered the U.S. president’s affair with a 24-year-old White House intern named Monica Lewinsky. I think about the lessons I learned then — lessons about power and sex, about who gets to tell the story, and who gets the benefit of the doubt. I learned a lot about who deserves respect, about what’s an acceptable way to treat a young woman, about what I myself could expect from society. I think about how lessons like the ones I learned then shaped my life, my confidence, my tendency to blame myself and feel ashamed instead of angry when I was taken advantage of, when bad things happened.

It doesn’t matter what you believe to be the ‘truth’ about Depp and Heard’s relationship. What matters is that we turned it into a garish cartoon spectacle, a joke.

It doesn’t matter what you believe to be the “truth” about Depp and Heard’s relationship. What matters is that we turned it into a garish cartoon spectacle, a joke. In doing so, I fear that for our children we’ve undone years and years of advocacy work, of public education around domestic violence, of struggling mightily to untie our own internal knots of misogyny.

As Jessica Winter noted in the New Yorker, the question “why did she stay?” has been so “exhaustively asked and answered over decades of work by domestic-violence advocates that it inspired an activists’ hashtag eight years ago.”

But now it was being asked again of Heard, loudly, derisively, mockingly, as if those earlier conversations had never happened. And my daughter, like so many of our kids, witnessed it all.