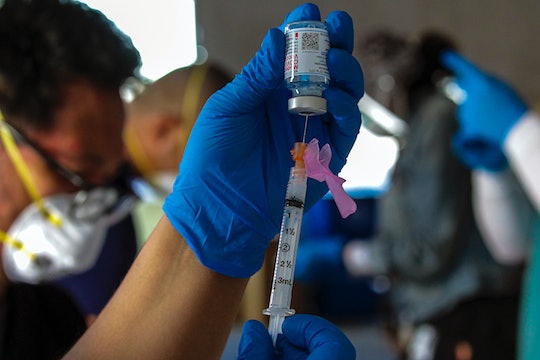 The Wealthy Are Lining Up For Vaccines In Low-Income Neighborhoods

A dispproportionate number of white people are receiving the COVID-19 vaccine.

So here's some terrible news that will probably not surprise anyone: According to a recent report from The New York Times, it seems that wealthy people are heading to low-income neighborhoods for the COVID-19 vaccine instead of waiting their turn like everyone else. It's happening in New York neighborhoods, but it's also happening across the country and in other countries where the COVID-19 vaccine has begun rolling out.

Since the vaccine has started to be administered across the country, more than 33 million shots have been given while 104 million vaccines total have been given out around the world, as per Bloomberg. According to a recent study from The Associated Press, it seems a disproportionate amount of those vaccines are being given to white people. A study performed in late January looking at COVID-19 vaccine trends in 17 states found that the percentage of Black people being inoculated was considerably lower than the percentage of white people. This is doubly concerning despite the fact that a high percentage of healthcare workers are Black, and healthcare workers were meant to be the first to receive the vaccine back in December.

"We’re going to see a widening and exacerbation of the racial health inequities that were here before the pandemic and worsened during the pandemic if our communities cannot access the vaccine," Dr. Uché Blackstock, a New York emergency physician and CEO of Advancing Health Equity, an advocacy group that addresses bias and inequality, told AP News.

In some neighborhoods, it's becoming apparent that this trend is already happening.

The New York Times reports that one nonprofit medical clinic, Bread for the City, has already noticed the deeply troubling trend since it started to offer vaccines to people who were 65 years or older. "Suddenly our clinic was full of white people. We’d never had that before. We serve people who are disproportionately African-American," George Jones, head of Bread for the City, told the news outlet. In New York City, per a separate report from The New York Times, half of all vaccines administered were given to white people, leaving the Black and Latino community vastly underrepresented.

It's a situation that stretches far beyond New York unfortunately. In Philadelphia only 12% of people who had been inoculated were Black, despite the fact that 44% of the population is Black. In total across the country as of the beginning of February, Politico reports that just 5% of the vaccines given out have gone to Black Americans while 11% have gone to Latino Americans. While only about half of the racial and ethnic data for the United States COVID-19 vaccine has been released, those numbers are undeniably grim.

It doesn't help that wealthy people are heading to poor neighborhoods to the vaccine, of course, but there appears to be another issue with COVID-19 racial inequity: Skepticism about the vaccine's efficacy. A December report from NPR found that 40% of Latinos surveyed by PEW researchers said they would probably not get the vaccine. While there are outreach programs in place, fighting skepticism alongside racism seems to be the challenge at hand when it comes to ensuring everyone gets vaccinated against COVID-19.