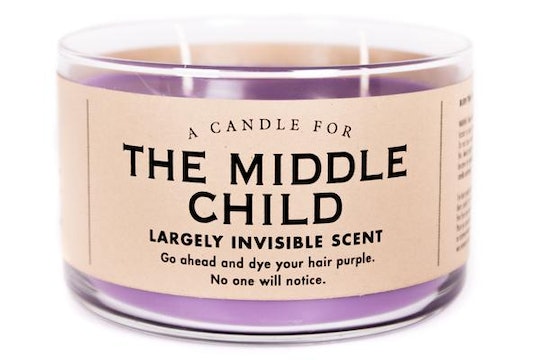 I Bet This Middle Child Candle Never Gets Lit

Stephanie Tanner would say, “How rude!”

I am the middle child of three and don't you, for one second, think I let anyone forget it. (Because they absolutely would if not for my constant reminders.) Whiskey River Soap Co. has tried to capture all of my angst in turmoil in a Candle for the Middle Child, but to tell you the truth, I imagine it smells like nothing but betrayal. That is, if anyone remembers to light it.

OK, so technically the website lists the scent as grape which is just great, because nothing artificially grape-flavored or scented tastes good. It's only natural that the candle for middle children smell like the Jolly Rancher everyone keeps sweeping aside in the Halloween candy bowl in the middle of January. It's what Jan Brady smelled like, after all.

But if you're the middle child in your family or have a sibling that bears the title, this candle can make a great gift, especially for National Middle Child Day on Aug. 12. (Yes, we get a holiday. Yes, you had no idea it existed. No, we’re not surprised.)

This gift says "Hey, I know your struggle" and also "I forgot to actually pick a gift out for you and candle seemed like a wise choice." Middle children are the peacemakers of the family. We are great team players and successful leaders, according to Psychology Today. Which means when we're finally acknowledged with a purple candle, we know to graciously accept it and say thank you, while marveling at the $50 Amazon gift card the youngest sibling got, and the box of family heirlooms given to the oldest. (Who, no doubt, will set up an eBay account for grandma's silver as soon as they get home.)

Naturally, there's also a candle for the oldest child and one for the youngest, because middle children can never have anything just for themselves. I imagine the oldest one just smells like smugness, but the website tells me it's actually a wintergreen scent to remind you of that brand-new smell all their things have. They've pretty much nailed the youngest child candle scent though: baby lotion. But while the website claims it's because they're an afterthought and always in the way, us middle children know best: it's because they're too precious for any other kind of scent.

This article was originally published on November 20, 2019