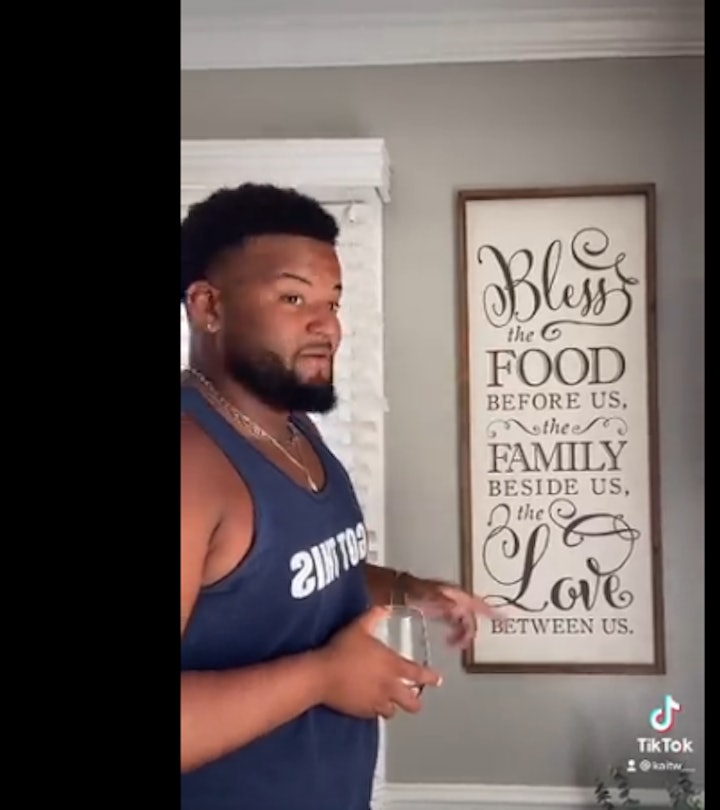 It is a truth universally acknowledged that a white woman in possession of a blank wall must be in want of word art.” Signs that say “Live Laugh Love.” Canvases with “Dream Big” scrawled across them. A small plaque proclaiming mama’s preference for wine, not whining. Some may call it cheugy, but some people just know what they like... and the Internet has discovered someone who likes word art more than maybe anyone. In a now viral video from TikTok user @kaitw__12 her boyfriend gives a tour of his “white mother’s home” on TikTok.

The two minute video, which has been viewed more than 1.3 million times as of press time, presents a tour of @kaitw__12’s boyfriend’s mother’s home. Kaitlynn, as she identifies on her TikTok account (though she appears as Kait on Twitter), is behind the camera, and can occasionally be heard giggling.

“Hello!” says her boyfriend (she identified him as such in a later video), already chuckling. “And welcome to my white mother’s home... home sweet home.” He then points to a welcome mat reading “Home Sweet Home.”

What follows is a tour of a house absolutely covered in word art. Imagine the wall art section of the biggest Home Goods in your area. It’s like that, plus probably another dozen signs they don’t have. From word art related to the room its in (“Let’s Cuddle” above a bed; “Gather” and “Eat” in the dining room) to inspirational reminders (“You is smart, you is kind, you is important”) to the very classic “L.L.L.” the personalized guided tour is cheeky good fun.

Social media has responded to this cornucopia of signs with sympathy, delight, and bewilderment. But, mostly, good humored chuckling... including the “white mother” herself!

In a follow-up video, Kaitlynn revealed her boyfriend’s mom (via a photograph of her holding one of her famous signs, naturally) and dispelled two main misconceptions. One, the aforementioned mom is not, in fact, a white woman. Kaitlynn describes her as “mixed” and shows pictures of her with her Black father. Kaitlynn also wants everyone to know that “mom” is truly beloved.

“I promise she’s not as chaotic as a lot of you think she is,” she said in the follow-up. “She is a very good woman, she just loves signs.”