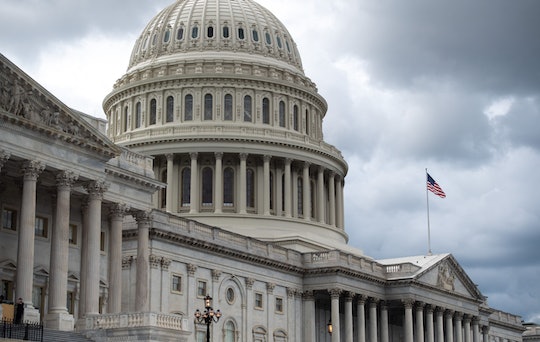 Teens On TikTok Are Calling Out Congress Over Riots In Capitol

Now they know how it feels.

When Trump supporters laid siege to the Capitol building on Wednesday, members of Congress were put in the terrible position of being forced to hide from the rioters. To hide under desks, terrified. Worried about what might happen to them. It was a situation familiar to kids across the country. TikTok teens are reminding Congress that their experience at the Capitol is basically just public school for kids all the time, and they are really not wrong.

Violent rioters taking over the Capitol building on Wednesday left a total of five people dead, including one Capitol police officer who died of injuries sustained while physically engaging with rioters. The Trump supporters were rioting against the confirmation of President-elect Joe Biden as the 46th President of the United States, contesting the election largely based on President Trump's insistence that the election was "stolen" from him and his supporters.

It was a dark moment, particularly as members of Congress were in the building at the time and had to shelter in place while the Capitol building was put into lockdown. Some tweeted about their experience in shock, like Democratic Michigan Rep. Dan Kidee who wrote, "I am in the House Chambers. We have been instructed to lie down on the floor and put on our gas masks. Chamber security and Capitol Police have their guns drawn as protesters bang on the front door of the chamber."

Sadly, this is an experience children across the country have experienced far too often, as some teens are pointing out on social media.

Teens are reminding Congress that they've been hiding under their desks for year.

As social media user Alice Wilder wrote on Twitter, “a lot of teenagers on tiktok are noting that congresspeople, after fearing for their lives and sheltering in place, now know what it feels like to be a student in our public schools.”

Wilder is describing active shooter drills that have become all too common in public schools across the country, where students are trained to crawl on the floor and hide under desks if an active shooter enters their school as opposed to simply enacting stricter gun restrictions. The past 10 years have seen 180 school shootings in America and left 365 victims dead. In fact, one of the few positive side effects of the COVID-19 lockdown has been that school shootings have not been an issue in 2020.

Wilder wasn't the only one to make that connection. Twitter user Kelly Burke wrote, "My 18 year old daughter just said 'what these congress people are describing, crawling on their hands and knees and hiding under seats, is what we’ve been through in school, NUMEROUS times.'"

Another tweeted, "Members of Congress felt for the first time what it must feel like when kids are locked down and hiding from guns brought into their school. Remember this feeling later this month when legislation to #EndGunViolence is introduced and this time, make sure it passes."

When Congress moves forward in 2021, they might want to consider their own experience of sheltering in place from Wednesday when looking at potential gun laws. Now they can actually put themselves in the shoes of students everywhere.