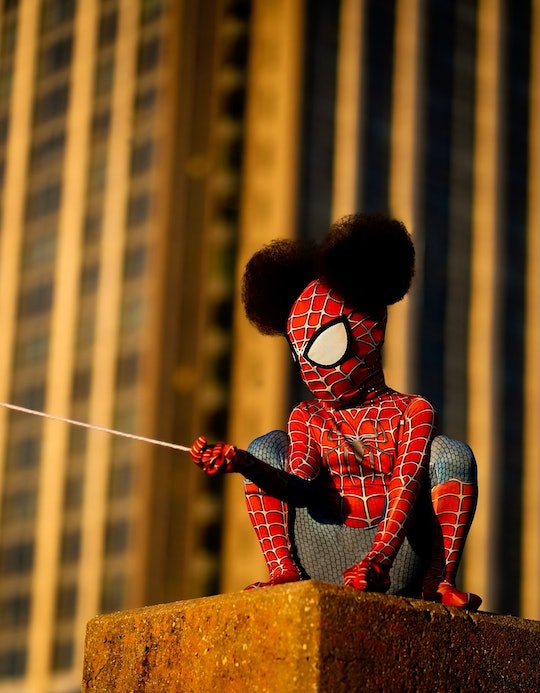 Step aside Peter Parker, Rose Jackson is ready to swing into the spotlight! Well, she already has. In honor of her third birthday, Rose rocked a full Spider-Man costume, mask included, in a photo shoot that’s recently gone viral. So viral, in fact, artists have created merchandise based on her look.

Rose’s mother, Diamond Jackson, who is a professional photographer and owner of Rae’s Bleu Rose Photography, snapped the photos of her 3-year-old daughter. In the photos, Rose is crouched down in front of a city building backdrop as if she was high in the air. It’s reminiscent of the classic Marvel character’s stance you would see in movies and comic books.

The mother of three tells Romper that her daughter started to become a fan of Spider-Man about 10 months ago. She admits that she is a bit stuck on how Rose is drawn to the character but has her theories. “I honestly have no idea,” Jackson says, “she saw a book bag with his image on it, and she fell in love.”

Since sharing Rose’s pictures on her Instagram page on Jan. 14, the images have gone viral, with over 51,000 likes. Artists, inspired by the pictures, have even created coffee mugs and paintings. Jackson added that she wanted to include Rose’s afro-puffs in the look and pictures because she wants her children to embrace their natural hair, which is a prominent theme throughout her images.

Rose is the youngest of Jackson’s daughters — her others are aged 10 and 5 — and is the only one who expresses interest in Marvel. Jackson says, for now, Spider-Man, is her one and only favorite. “She gets excited when she sees anything, Marvel,” she says, “but I think it’s only because she knows Spider-Man is associated.”

As far as seeing Rose in another costume photo shoot, her mother says “we will see soon.” In the meantime watch out Peter Parker, the future of the spider is looking bright!