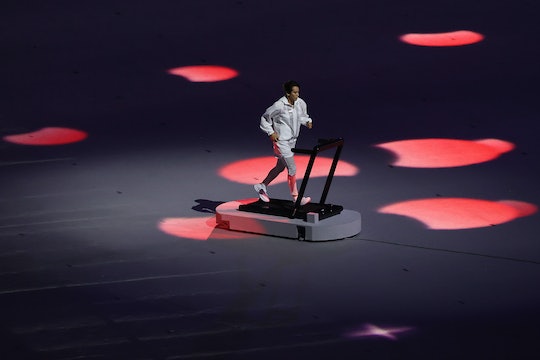 Arisa Tsubata is a boxer whose Olympic dreams were put on hold as she helped Japan fight Covid-19.

The Tokyo Olympics had an immediate star in its opening ceremony on July 23. A lone runner on a treadmill, staring straight ahead and not breaking a sweat as dancers swirled around them, looking calm and focused. There’s a reason that treadmill runner at the Tokyo Olympics looked unperturbed by the pressure. Arisa Tsubata is actually a nurse who helped Japan fight the Covid-19 pandemic and a boxer with Olympic dreams of her own.

Tsubata is a middleweight national boxing champion who was training for the past year to qualify for the Olympics. Sadly, the pandemic ruined her chances. The International Olympic Committee decided to cancel the final boxing qualifier in June due to the continued threat of Covid-19, instead offering spots to athletes based on their world ranking in the past few years. The boxer quit her job as a nurse at a major hospital in January after working on the frontlines to fight Covid-19, taking a lower-paying job at a clinic in order to train for the Olympics. How heartbreaking that she didn’t get her shot to compete.

"It's very disappointing," Tsubata told Channel News Asia. "I had been working so hard for a year after the postponement of the Olympics, and it's so frustrating that I don't even have the right to compete."

Instead, she was offered the chance to open the Tokyo Olympic opening ceremony. She ran alone on a treadmill on the stage and then was surrounded by dancers for a full five minutes. Tsubata was given her moment, even if it wasn’t the moment she had trained for, she was still there. Representing not just her country but a changed Olympic landscape as she ran alone on a treadmill in a virtually empty stadium that is meant to hold thousands of people.

Arisa Tsubata was meant to be given the chance to qualify as a boxer, after helping her country fight Covid-19. It didn’t happen. But she showed up. She made a difference. She ran. And we watched.