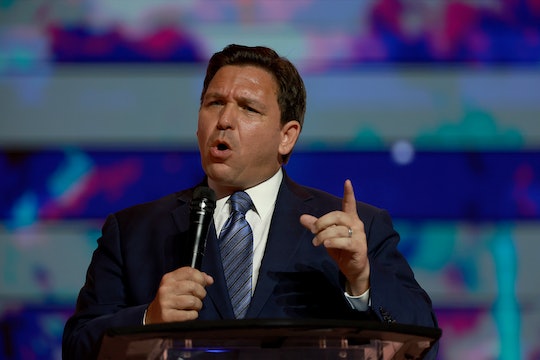 Florida has attempted to tackle the ongoing teacher shortage by granting temporary teaching certificates to veterans, a move that has been both applauded and criticized.

Florida is facing a school staffing crisis. As of January of this year, the Florida Education Association (FEA) — made up of educators and education professionals — reported that the state faced a deficit of more than 4,000 teachers and 5,000 educational support staff (from paraprofessionals to bus drivers and other essential employees). Florida has attempted to tackle this issue by granting temporary teaching certificates to veterans, a move that has been both applauded as a creative win-win and criticized as baldly political without effectively solving the issues that drive teachers from the profession.

The move comes as part of an $8.6 million initiative to employ veterans in the state of Florida. Senate Bill 896 — Educator Certification Pathways for Veterans — passed unanimously with bipartisan support in both chambers of the Florida legislature, and was signed into law by Gov. Ron DeSantis on June 9 of this year. Effective July 1, veterans from any branch of the U.S. armed forces with a minimum of four years of service and an honorable or medical discharge, 60 college credits and a minimum 2.5 GPA, a passing score on a Florida subject area exam, and secured employment in a Florida school will be granted a temporary teaching certificate, good for five years, while they finish their degree.

“For too long, the requirements to be a teacher have been too rigid, with union bosses insisting that all educators get certain credentials that often have little impact on teaching performance,” DeSantis said in a recorded statement posted to Twitter on Aug. 11.

DeSantis touts the virtues of having military veterans in the classroom, even without proper certification.

DeSantis has focused much of his political capital in reimagining public schooling since becoming governor in 2019, often under the rallying cry of “parents’ choice.” He supported legislation to ban mask mandates, Critical Race Theory, and discussing sexuality and gender (aka the Don’t Say Gay bill) in schools all while expanding voucher programs to support private schools at the expense of public institutions.

While the Education Certification Pathways for Veterans has found supporters, critics of the decision, including many teachers’ unions, suggest this is a move to weaken teacher’s unions while militarizing Florida schools. Even some veterans have criticized the decision as misguided at best and insulting at worst.

“[DeSantis] doesn’t respect veterans and military, he expects us to step up and serve the state of Florida much like we served the country, and do it for little to sh*t pay, once again taking advantage of veterans while using them as a political talking point,” says Twitter user @RyanShead, before highlighting the move as a ploy to demonize and weaken teachers’ unions that will lead to unqualified educators.

The FEA suggests that solutions to the “teacher shortage” has less to do with a lack of qualified professionals and more to do with the poor conditions and low pay Florida teachers face; they cite low pay (among the lowest in the country), lack of support, imposition from the state to “teach the test” without the flexibility to take more creative approaches to curriculum, lack of multi-year contracts, and overcrowding.

“Too many politicians treat public schools and the people who work in them as punching bags,” the FEA said in a statement earlier this year. “When the profession is repeatedly attacked; when the contribution teachers make to students and communities goes unrecognized; when bureaucrats who’ve never spent a day in a classroom tell teachers how to do their job — then it becomes difficult to attract and retain dedicated and qualified education professionals.”

More Like This
Nebraska Judge Rules Two Mothers Cannot Appear On Their Sons' Birth Certificates
GOP Sen. Lindsey Graham Wants To Create A Nationwide Abortion Ban At 15 Weeks
The FDA Is Worried People Are Cooking Chicken In NyQuil
Quinta Brunson Got A Sweet Card From A Kid On Abbott Elementary After Her Emmy Win