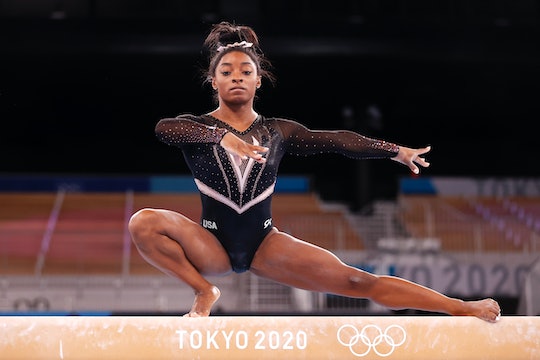 “Not my baby thinking Simone Biles is smiling at her and she’s smiling back.”

As an Olympic gold medalist who’s been hailed as one of the greatest gymnasts of all time, it’s no surprise that Simone Biles has fans all around the world. And that fanbase, of course, includes adorable babies on an errand with her mom. Anna Matthews recently shared a video of her baby girl smiling at a cardboard cutout of the Olympic gymnast in a grocery store and it’s gone so viral that it’s caught the attention of Biles herself.

“Not my baby thinking Simone Biles is smiling at her and she’s smiling back,” a voiceover says on Matthews’ TikTok video, which was laster reposted by the NBC Olympics’ Twitter page. In the video, the little girl looks utterly mesmerized by the cutout of Biles, which is an advertisement for Ritz crackers, and then lets out an adorable coo as her smile gets even bigger.

Matthews’ video has gotten over 677,000 reactions on TikTok since it posted earlier this week and NBC’s repost has received nearly 28,000 views on Twitter, so it was only a matter of time before Biles caught wind of the cuteness, too. In a retweet of the video, the four-time Olympic gold medalist said, “How precious my heart. Videos like this will never get old!”

Fans were also smitten by the video, including Barbie, whose official Twitter page wrote, “Melting,” with heart emojis. Another tweeted, “The importance of positive representation in 8 seconds.”

Meanwhile, the real Biles continues to leave us in awe! On Thursday, she secured another bullet point in history when she completed the world's most difficult vault in practice. The 24-year-old executed a Yurchenko double pike, which involves a round-off onto the springboard, a back handspring onto the vault, and ends with a piked double backflip to the landing. As the Washington Post described it, “If Biles successfully completes this skill in competition in Tokyo, it will be named for her.”

No matter what Biles and the rest of Team USA pull off during the Summer Games this year, one bet we could make right now is that the gymnast’s fans could not be cuter.