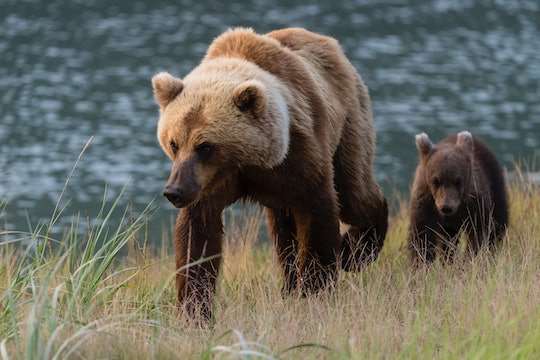 “It’s been nearly six hours and she still hasn’t given up on her cub.”

A mother’s enduring love is universal. That’s the message the internet is resonating with after a Yosemite National Park ranger recently shared a gut-wrenching photo that’s going viral of a mother bear grieving for her young cub who’d been hit by a speeding car.

On July 16, a ranger from Yosemite National Park shared a photo of a mother bear standing over her cub looking distraught on the park’s Facebook page. In the caption of the post, the ranger explained that the female cub had been hit by a speeding vehicle and left dead on the side of the road, something that apparently has sadly “become routine.” The ranger got the call that there was a dead bear on the side of the road and drove to the site to investigate.

“Its tiny light brown body laying just feet from me and the road, nearly invisible to every passerby. It’s a new cub — couldn’t be much more than six months old, now balled up and lifeless under a small pine tree,” the ranger wrote. “For a moment I lose track of time as I stand there staring at its tiny body, but then the sound of more cars whizzing by reminds me of my place and my role. I let out a deep sigh and continue on with my task.”

“I pick up the cub — it couldn’t be much more than 25 pounds — and begin carrying it off into the woods,” the post continued. “I have no certain destination; I’m just walking until I can no longer hear the hiss of the road behind me.”

Not long after laying the cub on “a grassy spot surrounded by a semi-ring of down logs,” the ranger saw the mother bear approach, using a type of grunting they recognize as a mother calling for her cub. Hours after the cub had died.

“It’s been nearly six hours and she still hasn’t given up on her cub. I can just imagine how many times she darted back and forth on that road in attempts to wake it. It's extremely lucky that she wasn't hit as well,” the ranger wrote. “The calls to the cub continue, sounding more pained each time. I glance back finding myself hoping it would respond to her call too, but of course, nothing. Now here I am, standing between a grieving mother and her child. I feel like a monster.”

A mama bear stayed by her cub’s side for hours after she died.

This mama bear’s refusal to leave her cub, even six hours after she lay dead on the ground, was such a poignant example of the enduring love of motherhood.

“Thank you for sharing this, and I’m sorry for your pain,” wrote one Facebook user. “Poor mama bear. Your rendition of this is so poignant. I agree with others, this photo and story needs to be given with the map at the gates.” Another wrote, “So heart wrenching. Tears made it a difficult read. Rest In Peace to the cub or Cubs this poor mom has lost. I hope she remains safe. Poor mama bear.”

The ranger ended the post with a plea to visitors to remember that “we are all just visitors in the home of countless animals and it is up to us to follow the rules that protect them.” The ranger urged people to “go the speed limit, drive alertly, and look out for wildlife.”

“Every year we report the number of bears that get hit by vehicles, but numbers don’t always paint a picture,” the ranger explained. “I want people to see what I saw: the sad reality behind each of these numbers.”