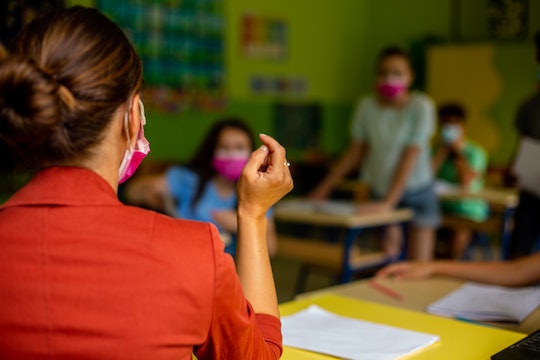 Virginia Parents Now Have A Tip Line To Tattle On Teachers

Virginia Gov. Glenn Youngkin wants to hear from parents. Or rather he wants parents to alert him to instances of what he calls “divisive practices” happening in schools. While speaking with conservative radio host John Fredericks earlier this week, Youngkin revealed he’d created a “tip line” for parents to report schools or teachers that were requiring masks or teaching things like critical race theory. The launch of the governor’s tip line comes less than a month after he used executive orders to veto school mask mandates across the state and ban “inherently divisive concepts” such as critical race theory from being taught in public schools.

“We have set up a particular email address... for parents to send us any instances where they feel that their fundamental rights are being violated, where their children are not being respected, where there are inherently divisive practices in their schools,” Youngkin told Fredericks during an interview Monday. “We’re asking for folks to send us reports and observations that they have that will help us be aware of things like privilege bingo, be aware of their child being denied their rights that parents have in Virginia. And we're going to make sure we catalog it all.”

Youngkin said tips from parents would give his office “great insight into what’s happening at a school level” and further his ability to “make sure we’re rooting it out.”

“We’re going to get critical race theory and other inherently divisive practices out of the schools,” he told Fredericks.

Earlier this month, Youngkin kicked off his term as governor by signing nearly a dozen executive actions, including an executive order prohibiting “inherently divisive concepts” from being taught in Virginia’s public schools. His main gripe? Critical race theory. The academic and legal concept recognizes the systemic racism present in American society and institutions. In his executive order, Youngkin argued critical race theory “instructs students to only view life through the lens of race” and “denies” them the opportunity to think for themselves.

Critics of Virginia, and other states’ efforts to ban discussions on critical race theory or racism in schools, have pushed back on Youngkin’s email hotline.

“Black parents need to flood these tip lines with complaints about our history being silenced,” singer John Legend tweeted earlier this week. “We are parents too.”

The Virginia Teen Democrats urged parents, teachers, and students to use Youngkin’s tip line to share their demands for factual and inclusive lesson plans. “Use the tipline to tell Governor Youngkin that Virginians want a more inclusive classroom that tells the history of ALL Virginians!” the organization tweeted. “After all, he said he'd listen to the parents and teachers and students.”

More Like This
13-Year-Old Makes History As Youngest Black Person To Be Accepted Into Medical School
New York Can End Religious Exemptions to Vaccine Mandates, Says A Federal Appeals Court
These 21 Educational Board Games Are Perfect For Homeschoolers
7 Questions To Ask Your Child's Kindergarten Teacher