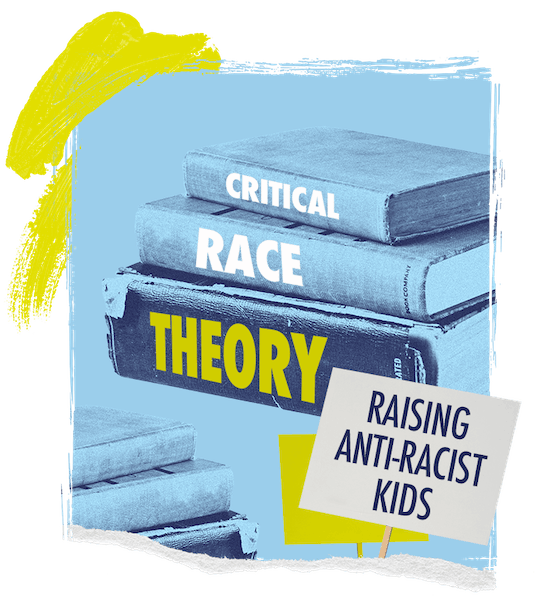 We have our work cut out for us.

You’ve probably read about the raging debate over critical race theory (CRT) in schools or seen parents and caregivers getting very irate at the idea of CRT “being taught” to their children. In fact, it’s been officially banned from schools in six states — so far. It might seem like an incendiary or confusing topic, but if you’re a parent or caregiver who cares about centering your child’s education around facts and an embodiment of equity, it’s not enough to just read the news stories or grimace at the comments in your local parenting group on Facebook. It’s critical that we know what CRT is, what it isn’t, and why some people are so upset about the idea of their kids being exposed to it.

Most importantly, we can’t get distracted by baseless accusations that are only peripherally related to reality. Let’s jump into correcting some misconceptions about CRT and what parents and caregivers can do about it because we have our work cut out for us.

What is critical race theory?

CRT is a graduate-level framework that takes a deep look at how the legacies of slavery and segregation are engrained and exhibited in the legal systems of this country. CRT, as defined by the person who actually coined the term, Kimberlé Crenshaw, “is a way of looking at race.” As she explained to MSNBC, “The point of CRT originally was to think and talk about how laws contributed to the subordinate status of African Americans, of Indigenous people, and an entire group of people who were coming to our shores from Asia. … Critical Race Theory is a law school course.”

Here’s something that needs to be made abundantly clear: CRT is actually not being taught in K-12 public schools, nor is it being considered to be taught in schools. “I don’t know of any school where teachers are teaching this to grade-school students,” Matt Gonzales, an expert on education policy and educational equity, tells me.

“Critical race theory isn’t being taught in K-12 schools, but it’s being used as a proxy for talking about anything related to race, racism, the teaching about true history and present day life, and so much more,” explains Barbara Gross of the Education Justice Research & Organizing Collaborative (EJROC), at New York University’s Metro Center. “CRT is an important framework for understanding how white supremacy and racism impact our education system, but it is not being taught in that system.”

Where is the criticism coming from and why?

And it’s all about votes. Joy Ann Reid notes, “This is the result of a highly manufactured strategy created by seasoned political operatives looking for the perfect wedge issue to take back power, something to combat the energy of the multi-racial coalition that took Georgia. … It is a coordinated response to control curriculum. It’s part of an electoral strategy to whip up a right wing extremist base.”

Erasing the roles of racism, white supremacy, and colonialism from our history doesn’t erase the impact of those injustices that all children still face to this day.

The right wing is creating a fury over CRT, when in reality what they are aiming for is a whitewashed version of this country’s history. Their claim is that teaching real history and facts that expose the legacies of slavery and racism will paint the United States in a negative light and divide people. They claim that it will teach white kids to hate themselves. The truth is that all kids, even white kids, need to learn about the systemic impacts of racism and slavery. This can be done in ways that lead to careful analysis and action, as opposed to fear and shame.

What should be taught in K-12 schools?

Even though CRT is a graduate level framework, we do need to advocate for the underlying principles of CRT to be taught in schools — children need to learn accurate and factual history in age-appropriate ways. We need to reckon with the inaccuracies of what is being taught in history class and demand that, for the sake of our kids, facts be the guiding factor when deciding curriculum. Erasing the roles of racism, white supremacy, and colonialism from our history doesn’t erase the impact of those injustices that all children still face to this day.

Some schools are already adopting approaches that center equity and justice, like a culturally responsive approach to education, as well as teaching the principles and practices of Black Lives Matter at School.

In a 2019 interview with the Wisconsin Center for Education Research, education expert Gloria Ladson-Billings spoke about a different approach to education that “requires a focus on students’ learning, an attempt to develop their cultural competence, and to increase their sociopolitical or critical consciousness.” The teacher’s role here, she said, “is not merely to help kids fit into an unfair system, but rather to give them the skills, the knowledge, and the dispositions to change the inequity. The idea is not to get more people at the top of an unfair pyramid; the idea is to say the pyramid is the wrong structure. How can we really create a circle, if you will, that includes everybody?”

Zaretta Hammond, author of the bestselling book Culturally Responsive Teaching and the Brain, explained to Education Week, “Culturally responsive teaching is when the teacher grounds the lesson in community issues that are relevant and meaningful to students’ daily life as a vehicle for teaching content.” When kids feel seen and acknowledged for all of who they are, including their race, culture and ethnicity, it can greatly impact how they learn.

What can parents and caregivers do to support their schools in embracing the principles of CRT?

The Center for Racial Justice in Education

The Alliance to Reclaim Our Schools (AROS)

This article was written after many conversations with Barbara Gross and Matt Gonzales, as well as Adam Jacobs, a longtime educator and my partner in anti-racist parenting.

More Like This
Winter Travel Tips For Families
72 Hilarious Valentine's Day Jokes For Kids
Tips to Beat Jet Lag, For You & Your Kids
Do Parents Really Need To Worry About Their Gas Stoves? Pediatricians Explain
What Parents Are Talking About — Delivered Straight To Your Inbox