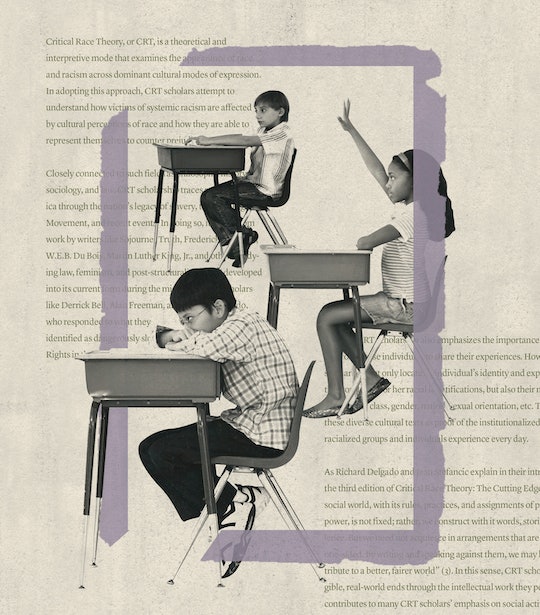 3 Myths About Critical Race Theory That Parents Need To Understand

Critical Race Theory (CRT) is one of the more polarizing topics facing schools today, but how many people truly understand what it is? A national Reuters/Ipsos poll found that 57% of adults said they were not familiar with the term. Those who responded that they were familiar with it responded to follow-up questions that “showed they embraced a variety of misconceptions about critical race theory.”

“I think what is happening is that politicians have found a buzzword that people don’t understand,” says Emily Glankler, a history teacher in Austin, Texas and host of the social series and podcast Anti-Social Studies.

Of course, it’s not just politicians: the right-leaning media — notably Fox News — has made it a cornerstone of their current programming. A Media Matters study found that while mentions of critical race theory began last year at a slow trickle, they have exploded recently. “In June, there were 901 mentions on the network, the highest number of any month and an increase from 537 mentions in May. In the past 3 ½ months there have been over 1,900 mentions of critical race theory on the network.”

The concept has sent some parents into a frenzy, swarming school board meetings to protest the prospect of teaching CRT in classrooms and sparking wide debates over whether it is unpatriotic and divisive. Many Republican candidates are using this fear as a campaign tool, promising to ban CRT if they are voted into office. As of late June, 26 states have introduced legislation or “taken other steps that would restrict teaching critical race theory or limit how teachers can discuss racism and sexism,” according to an Education Week analysis. Nine states have actually passed these bans, including Florida, Idaho, Tennessee, and, most recently, Oklahoma.

What Is Critical Race Theory & What Are Its Origins?

Simply put, CRT is an academic framework for understanding how laws, government, education, and other social institutions have been influenced by racism throughout history. “Critical race theory does not admonish people as individuals. It says that systemic racism exists and we have to examine it from a critical standpoint, admitting that it’s a part of our laws that continue to perpetuate inequality,” Rayshawn Ray, professor of sociology and executive director of the Lab for Applied Social Science Research at the University of Maryland, College Park, tells Romper.

Though the most recent debate about CRT grew out of last summer’s widespread protests against racial injustice in response to the murder of George Floyd, it is by no means a new idea. It was developed in the mid-1970s from what was known as critical legal studies, or CLS, which argued that the law is not neutral and is used to maintain a social power structure.

The conversation on right-wing media and the proliferation of statewide bans on CRT might lead you to conclude that it is being taught widely in American schools; it is not. (The Ipsos/Reuters poll, for example, showed 22% of those who said they were familiar with Critical Race Theory also think it is taught in most public high schools, which is not remotely the case.) The truth is that CRT is an academic discipline mostly taught in colleges and law schools.

Far more likely is that students are learning about the history of slavery, systemic racism, and about diversity and inclusion efforts in their communities. The National Educational Association, the largest teacher’s union, agrees that “We need to teach the truth about systemic racism.” And Glankler, who also mentors history teachers across the country, finds it impossible to properly teach parts of American history, like Jim Crow laws, without addressing institutionalized racism.

Myth 2: Small Children Are Too Young For These Concepts

No, says Glankler, who has a toddler — and they’re certainly not too young to learn about racism or about the values of a diverse, equitable, and inclusive society. “Even if you are not talking about race in your home, your kid is noticing it from a really early age. What we as teachers are trying to do is help guide them so that they do feel safe,” she says.

Glankler believes there is a very simplistic approach that teachers can take when talking to young children about diversity and racism using picture books and child-friendly language. Their naturally inquisitive nature will cause the conversation to progress. “We need to trust teachers,” she says.

CRT has not only been labeled anti-white, but also anti-American and racist. "Critical Race Theory teaches kids to hate our country and to hate each other. It is state-sanctioned racism and has no place in Florida schools," wrote Florida’s Republican governor Ron Desantis on Twitter, after the state banned CRT in schools.

But defendants of the theory say this is a gross mischaracterization. “The objections to CRT are widely made by people who do not want to talk about racism in any way,” says Ray. “They want to view America as perfect, but they’re hurting their children. What I find is when they get to college, these students are angry with their parents for not giving them an accurate view of the world they grew up in. People need to take a step back from making it an attack on their individual identities when people are assessing America.”

Parents and politicians have claimed that teaching CRT will make white students feel guilty, but Glankler says she’s found it’s the exact opposite. Racism is a scary thing for any child to learn about, but a more nuanced understanding of the harm it causes is actually empowering. “For a child to learn that it’s the systems that are in place that perpetuate these problems, it’s freeing,” she says. “They can unify over it. Now the enemy is not white people, it’s the systems that were built before any of us were born.”

More importantly, CRT is a way to make space for the experiences of students of color in a system that has often whitewashed history and ignored the Black experience.

Rayshawn Ray, professor of sociology and executive director of the Lab for Applied Social Science Research at the University of Maryland, College Park