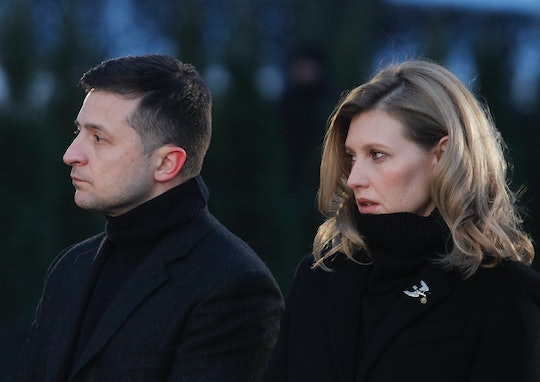 Volodymyr Zelensky And His Wife Olena Zelenska Are Parents Of Two

The former actor and comedian and his screenwriter wife have become the faces of the resistance in Ukraine.

In the weeks since Russian president Vladimir Putin launched a full-scale invasion of eastern Ukraine, all eyes have been on Volodymyr Zelensky. The Ukrainian president remains in the capital city of Kyiv alongside his countrymen in a bid to defend their country, despite his assertion in a statement that he is Putin’s “target number one” and that his wife, Olena Zelenska, and their two children are “targets number two.” As first lady, Zelenska is playing her own part in fighting this battle, even sharing photos of Ukrainian children who were killed in the attacks on Instagram. As the Russia-Ukraine conflict intensifies and attention on the country’s leader is at an all-time high, here’s what you need to know about President Zelensky’s family and the first lady’s effort to keep her country’s plight in the hearts and minds of the world .

The first lady has taken to social media to beg for an end to the violence.

On Sunday, March 6, First Lady Olena Zelenska shared a heartbreaking post on Instagram. Below the photos of five children who were killed in the attacks, Zelenska wrote, “I appeal to all the unbiased media in the world! Tell this terrible truth: Russian invaders are killing Ukrainian children.”

“Tell it to Russian mothers,” she continued. “Let them know what exactly their sons are doing here, in Ukraine. Show these photos to Russian women — your husbands, brothers, compatriots are killing Ukrainian children! Let them know that they are personally responsible for the death of every Ukrainian child because they gave their tacit consent to these crimes.”

As of March 6, 38 children have been killed in the conflict, Sky News reported.

Victims Zelenska wrote about in her post include an 18-month-old boy who was killed by shrapnel and a 7-year-old girl who died when a pre-school was hit in an attack, iNews reported.

This isn’t the first time the first lady has used her platform to make an appeal.

Since Russia’s invasion, Zelenska has been reaching out to the Ukrainian people with bolstering Instagram posts full of pride in her country.

“My dear people! Ukrainians! I’m looking at you all today. Everyone I see on TV, on the streets, on the Internet,” she wrote on Feb. 24. “I see your posts and videos. And you know what? You are incredible! I am proud to live with you in the same country! And today I will not have panic and tears. I will be calm and confident. My children are looking at me. I will be next to them. And next to my husband. And with you.”

Zelenska remains dedicated to helping Ukrainians and sharing their plight. In another post on Instagram, she shared a photo of a baby born in a bomb shelter, with the caption: “This child was born in the Kyiv bomb shelter. This was to take place in completely different conditions, under peaceful skies. It is what children should see. But the main thing is that despite the war, there were doctors and caring people on our streets next to her. She will be protected and defended.”

While she wasn’t initially enthusiastic, Olena Zelenska has since embraced her role as first lady.

After her husband’s surprising landslide victory, Zelenska admitted to Vogue Ukraine that she was “aggressively opposed” to her husband’s new role as president. Especially as it left her with almost no time as a private person. “I do not have enough time alone with myself. I have got two kids, so I have rarely been alone before. I probably have had my only private space in the car, while driving. Now they have deprived me of this — I am always guarded. Now a bathroom is my only retreat.”

She might not have been on board in the beginning, Zelenska has worked hard throughout her time as first lady on issues that are important to her, such as gender equality.

Zelensky’s family remains in Ukraine with him.

Their daughter Aleksandra is 17 years old.

Zelensky’s daughter didn’t want him to run for a second term.

Volodymyr and Olena Zelensky welcomed their daughter Aleksandra in July 2004. The couple keep information about their children private for security reasons, but Aleksandra did do a little acting with her dad before he became president. At 10 years old, she played his daughter in a movie called 8 New Dates, and when she was 12, she took part in a reality show called Laugh The Comedian, for which her dad was a juror.

Aleksandra is reportedly nearing the end of her schooling, and her dad admitted in an interview with a Ukrainian TV channel that she did not want him to run for president for a second term. “My daughter raises this issue; she doesn't want me to run for the second term,” he said in 2021, per the news outlet Report. “No matter how much I love her, it depends solely on the level of our capabilities.”

Their son Kiril is 9 years old.

In 2013, Olena and Volodymyr Zelensky welcomed their son Kiril, who is now 9. Not much is known about young Kiril, again for good reason — his parents are clearly prioritizing his safety. But in a rare family Instagram post from 2019, the Zelenskys can be seen having a great afternoon of face painting, showing both Kiril and his dad with designs on their faces.

For security purposes, Kiril, his mother, and sister are currently at an undisclosed location in Ukraine while Zelensky leads his country at it continues to face a violent invasion from Russia.

In the first week of Russia’s invasion of Ukraine, an estimated 1 million people have been displaced, according to the United Nations Refugee Agency. Babies are being born in bomb shelters, people are hiding in metro stations. It is catastrophic, and the Ukrainian people need our help.

This article was originally published on March 2, 2022