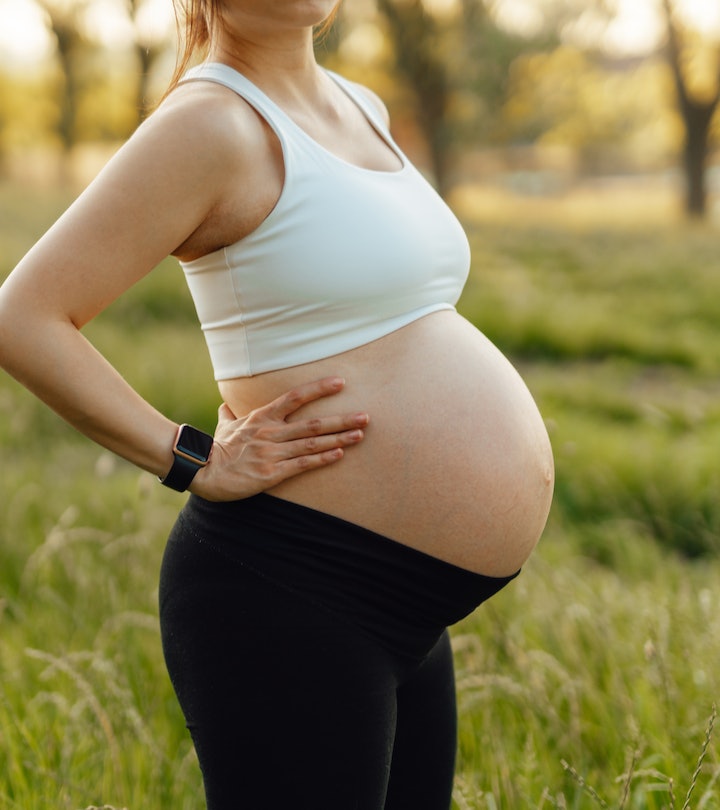 Here's What It *Really* Means If You're "Measuring Ahead," According To An Expert

Should you be concerned?

There is a lot of diagnostic testing that is completed while you're pregnant. Likely, you're already an expert on everything from nuchal screening to the four chamber heart exam. However, there are some tests that are a little more ambiguous, and may lend themselves to various answers running around your brain. A good example for these is the fundal height and ultrasound size testing. You may measure perfectly for your due date, or larger or smaller, depending. But, what does it mean if your baby is measuring ahead? Is it simply a case of a bigger baby, or should you be concerned?

What Does It Mean If Your Baby Is Measuring Ahead?

There are a myriad of reasons you might be measuring ahead. One is that you have an abnormally large amount of amniotic fluid — more than normal — surrounding your baby. This condition, known as polyhydramnios, is usually noticeable to the mother because of the feeling of discomfort and difficulty feeling the baby move in the womb, according to the Mayo Clinic. Another reason is that your due date was calculated incorrectly, which, while rare, does occur. You could be carrying a large baby, or more than one, or you might have fibroids of a significant size that's forcing your womb forward, causing you to measure ahead, according to The Journal of Obstetrics and Gynaecology.

But what are the implications of measuring ahead for the mother and child? Is it dangerous? What does it mean if you're measuring ahead if it's almost your due date? It's a pretty tense question. I spoke with OB-GYN Dr. James Smith and he tells Romper, "Fundal height measurement isn't an exact science, but it gives us a good starting point. Sometimes, you could measure ahead or behind by virtue of a mere trick of your anatomy." I can vouch for this. When I was pregnant with my daughter, I was measuring a few weeks behind when it was almost my due date. I was justifiably frightened. My OB-GYN sent me for a fetal scan at the ultrasound clinic. As it turns out, my daughter was happily hanging out low in my very deep pelvis, and was actually measuring a bit bigger than expected as opposed to a few weeks behind. I delivered her at 38 weeks, and she was 7 pounds, 4 ounces of squish.

Can Measuring Ahead Be Dangerous For You Or Your Baby?

"Most of the time, it's not a huge deal, and we simply monitor it, and continue as normal," Smith adds. "However, if the OB-GYN is concerned, or if you have a condition like gestational diabetes that carries the risks of very large for age babies, we will send you for a scan." He says that the scan helps them determine what comes next. "Some babies are just a bit bigger, and it's not a worry. Women's bodies are more capable than we give them credit for being."

He does note, however, that it sometimes can be dangerous. "There are times when we can see that your baby has what we call fetal macrosomia, which is just a fancy Latin term for really big baby. It can be strategically difficult to determine the best course of action in these cases. Some OB-GYNs will schedule a C-section, and some will induce between 38 and 40 weeks. It's really determined on a case-by-case basis, where we look at many factors to evaluate the best option for the mother and child."

He also adds that in the event that you're measuring large because you have a lot of fluid, that, too, is monitored closely to determine whether or not the excess of fluids is putting the mother or neonate in danger in any way. But mostly, they just keep an eye on it.

Measuring ahead sounds scarier than it needs to be. It seems to most likely mean that the newborn sized clothing and diapers will have no use in your home, so stock up on the bigger sizes, or prepare for a lot of baby nudity.

More Like This
Everything You Need To Know About Postpartum Blood Clots
Breaking Down The Different Types Of Postpartum Infections
Are Movie Theaters Too Loud For Pregnant People? OB-GYNs Explain
All The Reasons Why You Might Have A C-Section

This article was originally published on Oct. 31, 2017