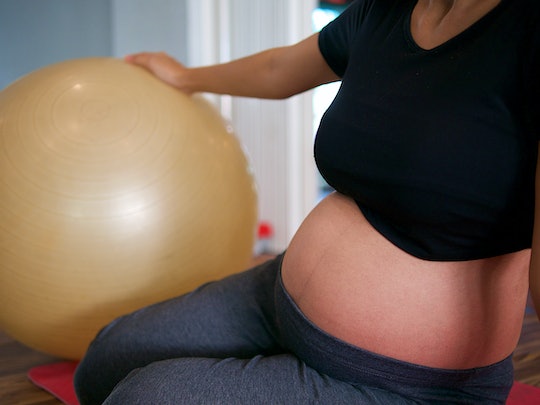 If You Need That Baby To Drop & Engage, Here's What You Can Do

My best friend’s second baby was breech pretty much the entire pregnancy, even at the end. As her due date approached, her doctors encouraged her to learn more about how to make your baby drop and engage by giving her pamphlets on the topic and suggesting she do some research on her own. Thankfully, the baby turned on his own about three days before she was induced for other reasons, but what if he hadn't? What exactly is happening to your baby when they’re dropping and engaging and what are some safe ways to do so?

The technical definition of engagement is when your baby’s head enters the pelvis and his “head-down," according to Dr. Idries Abdur-Rahman, OB-GYN, author of Everything You Ever Wanted to Know About Pregnancy (But Were Too Afraid or Embarrassed To Ask) and one half of the Twin Doctors for TwinDoctorsTV.

“The baby will generally be in the head-down position by about 32 weeks of pregnancy (7 months), but even when the baby is head down, his or her head can still be high above the pelvic bones. Once a baby drops, his or her head settles into the pelvis,” he says in an email interview.

Typically (but not in my friend’s case), Dr. Abdur-Rahman says there is usually no reason to help your baby engage.

As for which types of exercises work best, Dr. Lisa Valle, OB-GYN at Providence Saint John’s Health Center in Santa Monica, California, tells Romper that pretty much "any type of activity that opens up the hips and stretches the muscles can help get the baby to engage. This would include sitting on a birthing ball, walking, and pelvic tilts.”

Abdur-Rahman also suggests pelvic squats, where you gently squat with your back against the wall, gently bouncing on a birthing ball, and “good old fashioned walking.”

“Nothing beats gravity when it comes to encouraging a baby to engage,” he says.

So how do you know if your baby has dropped and is engaged?

"Others might find it easier to breathe because there is more room in the abdominal activity now that the baby has moved down into the pelvis.” Abdur-Rahman concurs, adding that you may also notice an increase in vaginal discharge.

Once the baby has dropped, how soon you'll give birth varies from woman to woman.

“Unfortunately, there is no real correlation between when a baby drops and when you will go into labor," Abdur-Rahman says.

"First babies tend to drop later in pregnancy (around 38 to 39 weeks) while subsequent babies will drop earlier (around 36 weeks gestation). Once the baby drops, the cervix really starts to get ready for labor (it softens, thins, and dilates) but how long this process takes is highly variable.”

If you worked on getting your baby to drop and engage but it didn’t happen, there are things they can do at the hospital for you. For example, in rare cases when a baby is lying sideways (transverse) or is breech (butt coming first) close to the time of delivery, a procedure known as ECV (External Cephalic Version) is used to get the baby into the head-down position. This involves the doctor manually rotating the baby from the breech or transverse position hands with the visual guidance of ultrasound.

So if you’re trying to get your baby to drop and engage, remember that gravity is your friend, and keep on trying exercises that focus on your pelvis opening up to get the baby to drop down, including pelvic squats, bouncing on a birthing ball, or just going on a walk. And good luck!

Dr. Idries Abdur-Rahman, OB-GYN, author of Everything You Ever Wanted to Know About Pregnancy (But Were Too Afraid or Embarrassed To Ask) and one half of the Twin Doctors for TwinDoctorsTV.