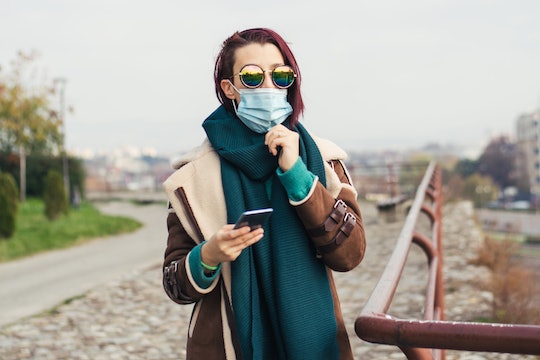 Here's How Your Cervical Mucus Changes Before Your Period

Sex isn't the only thing you'll track when trying to conceive — you're also looking at your ovulation date, which means taking a gander down at your cervical mucus. (I know.) It's all about having the right "type" of cervical mucus, which means sometimes you need to know what your cervical mucus look like before your period. Using it as a way to decipher what your body is up to is important, but it can be especially helpful when figuring out if doing the deed worked this month.

The Mayo Clinic noted that the role cervical mucus plays when trying to get pregnant is fundamental. "Before ovulation, cervical secretions change — creating an environment that helps sperm travel through the cervix, uterus and fallopian tubes to the egg." So once you've found fertile cervical mucus and have sex, you may keep tracking changes to your mucus. But can the texture of your cervical mucus tell you if your period is on its way or if you're pregnant?

Some women produce clear, watery discharge right before they start their periods, while others have no secretions whatsoever. Dr. Adrienne Zertuche, an OB-GYN at a division of Atlanta Women’s Healthcare Specialists, tells Romper that right before your period and “after ovulation, most women return to having no cervical secretions for the remainder of their cycle.” But if you do have discharge before your expected period, clear, watery discharge may almost look like ovulation cervical mucus. (Although typically most women are no longer ovulating at that point.)

So basically, there is no actual answer. Your cervical mucus right before your expected period could look white and creamy, or it could look watery and thin. It's not a great way to figure out if you're pregnant, but you can keep an eye on it and see if a pattern emerges. Especially if you hope to continue checking your cervical mucus while trying to get pregnant. Checking your cervical mucus can also go hand-in-hand with strategies like monitoring your menstrual cycle and your basal body temperature, according to Zertuche. But she does note that it shouldn't be used as a sole form of birth control, telling Romper that "more than 20 percent of typical users fail in execution and end up with an unintended pregnancy. You should sit down with your gynecologist to hear about the full range of contraceptive options before deciding to use fertility awareness-based methods."

If you want to try tracking your cervical mucus, Planned Parenthood recommends avoiding vaginal sex for one whole cycle (or using condoms) when you're first starting out: "Sex can make your body produce more or different mucus, which can be confusing when you’re starting out," the PP website explained, adding: "Record everything you notice about your mucus on a chart daily: your period days, dry days, wet days, sticky days, cloudy days, and slippery days." The following methods are the most effective ways to check your mucus: Wipe the opening of your vagina before you urinate "with white toilet paper or tissue," then observe the color and feel; look at the color and texture of discharge on your underwear; or insert (clean) fingers into your vagina and check the consistency by rubbing it and pulling it between your thumb and index finger.

The state of your cervical mucus can even indicate early pregnancy (though not with absolute certainty, of course). As VeryWell Family explained, "brown or pinkish vaginal discharge may occur during early pregnancy. This discharge may be a sign of implantation bleeding." The term "implantation bleeding" can be misleading, though. While it's often noticed right around the time that an embryo "would be implanting itself into the uterine lining," there's actually "very little evidence that implantation actually causes the spotting, but the name is based on the timing."

Ultimately, conception is a surprisingly inexact science, and every woman is different when it comes to her “secretions.” Just because you’re dry down there right before you’re scheduled to have your period doesn’t necessarily mean you’re out of the running for conceiving this month. Likewise, if you’re producing a ton of creamy mucus right before your period, that doesn’t necessarily mean you’re pregnant. Try not to stress too much, and happy tracking.

This article was originally published on Sep. 23, 2017