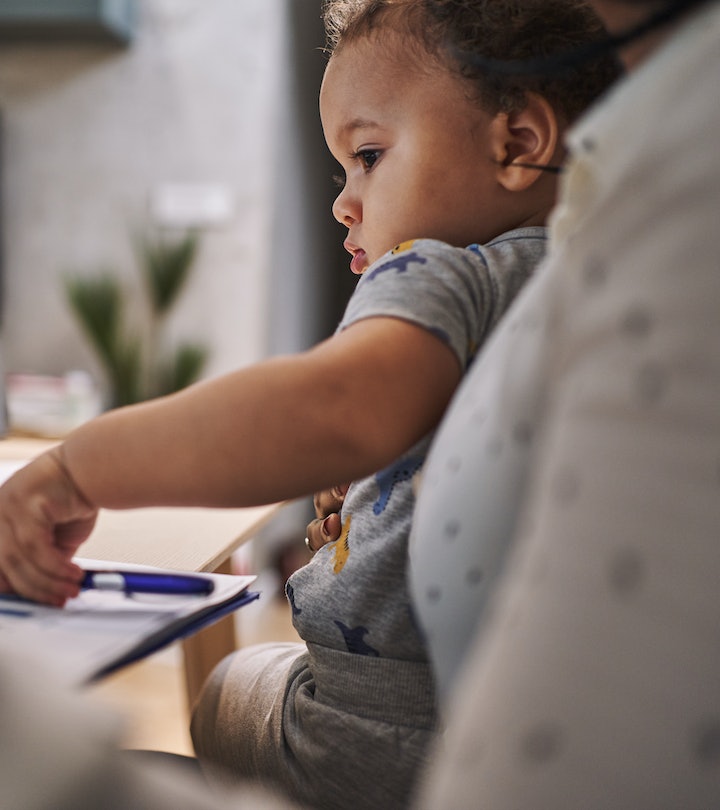 What If Moms Got Paid For All The Work They Do?

The "Marshall Plan For Moms" would see mothers receive a $2,400 monthly stipend among other benefits.

It's well known that being a mom is a full-time job. But what if that full-time job was one that paid? In a December op-ed for The Hill, Girls Who Code founder Reshma Saujani proposed the government pay moms $2,400 a month under the Marshall Plan for Moms. Modeled after the original Marshall Plan passed in 1948, Saujani's plan aims to support mothers, many of whom have been disproportionately impacted by the current coronavirus pandemic, while also stimulating the economy. She, and 50 other prominent women, are now leaning on President Joe Biden to turn her idea into reality.

"Each day, about 45 million women in this country show up to a job where they regularly work overtime, are paid nothing, and get no time off," Saujani wrote for The Hill. "Their job title is mother. It’s time to compensate them for their labor."

However, along with a "means-tested" $2,400 monthly payment, Saujani's Marshall Plan for Moms would also create a parental leave policy, affordable childcare, and pay equity. In her op-ed for The Hill, she argued Biden should, within his first 100 days in office, create a task force specifically dedicated to implementing a Marshall Plan for Moms.

Now, 50 prominent women have joined Saujani in signing an open letter to President Biden, urging him to create just such a plan. The letter, which was published Tuesday in The New York Times, urges Biden to not only appoint a task force to create a Marshall Plan for Moms but to also implement short-term monthly payments — based on needs and resources — to moms and pass policies related to paid family leave, affordable childcare, and pay equity.

“You didn’t create this problem, but your administration has an opportunity to fix it in your first 100 days,” the letter read. “It’s time to put a dollar figure on our labor. Motherhood isn’t a favor and it’s not a luxury. It’s a job.”

In an interview with Yahoo! Finance, Saujani explained that her call for moms to receive a $2,400 monthly stipend was based on the $600 a week unemployment benefit included in the first COVID-19 economic relief package Congress passed. "I think it should account for the ones who need it the most," she told the news outlet, when asked if the stipend should be dispensed on a sliding scale based on income. "But the point of this is that we have to put a number on it. We do not value what we get for free in this country."

The United States enacted the original Marshall Plan in 1948 as a means of providing more than $15 billion in aid to Western Europe following World War II, according to The History Channel. Over the course of four years, the program worked to aid in the reconstruction of devastated or heavily damaged cities, industries, and infrastructure while also improving stalled trade and commerce between Europe, the U.S., and other neighboring countries.

It was unclear from Saujani's op-ed if she intended for her Marshall Plan for Moms to follow the original Marshall Plan's four-year timeline or carry on indefinitely. What is clear, however, is that moms across the country are struggling under the added weight the current pandemic has added to their already heavy caregiving burden. "Since March, our mothers have been working simultaneously as teachers and counselors and cleaners and nurses and nannies and chefs and tech support and the list goes on and on and on," Saujani wrote for The Hill. "Countless millions of women have been forced to cut their working hours, scale back their careers, or leave the workforce entirely in order to be full-time caregivers."

In October 2020, the National Women's Law Center reported that as children across the country returned to school via remote learning models, a staggering 865,000 women left or were forced from the workforce in September, a number four times higher than the number of men reported to have left the workforce that same month. But while those numbers were staggering, they're hardly an isolated find. A New York Times analysis found that from February to September, moms' participation in the workforce declined 3.3 percentage points, compared to working fathers' 1.3 percentage point decline.

For the mothers who've remained in the workforce, the act of juggling work with caregiving duties, household chores, and management of children's schooling is a constant struggle that leaves little room for anything else. "This. Is. Me. Every day," Vote Mama founder Liuba Grechen Shirley tweeted in response to Saujani describing the "exhausted moms with infants in their laps" she sees daily in video calls in her op-ed for The Hill. "A Marshall Plan for Mamas. Love this idea!" Shirley continued.

"All the data shows [money] invested in women & mothers has an exponentially positive impact on kids + communities," Reva Seth tweeted. "So imagine the leapfrog forward that a 'Caregiving Czar' as per @melindagates + 'A Marshall PlanForMoms' as per @reshmasaujani would have."

But while the struggles of working moms have been headline news for months, Saujani questioned if lawmakers are aware of the extent of the problem or if they even care. She noted that while the Marshall Plan for Moms can't physically lessen the care burden moms carry, it can make carrying that burden a little easier and a little more lucrative. More importantly, it might begin to reverse the country's long history of undervaluing mother's labor. As Saujani wrote, "It will send a hugely important signal to little girls and young women across the country: that our society values the contributions of women, and that their careers, dreams, and lives will not be taken for granted."

This article was originally published on Dec. 16, 2020