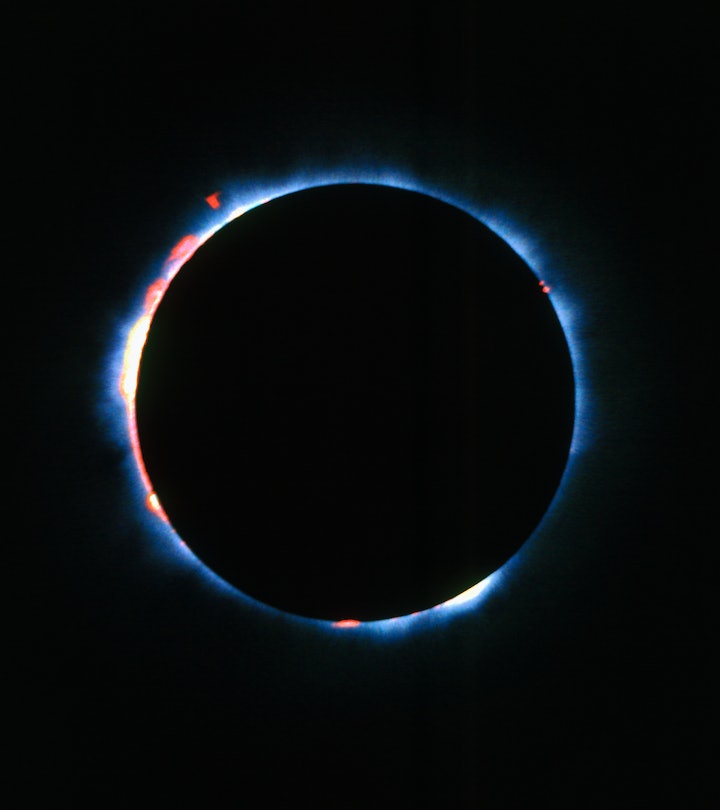 You might have a little fireball on your hands.

Astrologists agree that solar eclipses are known for shaking things up a bit. Known as “dramatic wild cards,” the celestial event has been linked to big life changes including career breakthroughs, marriage proposals, purchasing a new house, and even divorce. Some say it even triggers hotter sex. But what about if you have a bun in the oven who decides to make its exit during this time? Is there something astrologically special about giving birth during an eclipse? Or give birth during a solar eclipse?

What does it mean if you give birth during the solar eclipse?

Famous astrologist Charles Jayne wrote that people born on the day of an eclipse “…were unusually fearless both of physical danger and of the opinions of others about their actions and attitudes. In addition, they were unusually direct and brusque to the point of formidableness, and while they were not quarrelsome, woe betide the person who tried to put something over on them as they were ruthless in their dealings with those who tried to cross them.”

OK, so we know that your child will apparently have no issues fending for themselves on the playground, but what about your pregnancy? Research shows that while the cosmos are have been pegged for shifts in moods and emotions — because, you know, pregnancy hormones just aren’t enough — a solar eclipse has no known effects on pregnancy.

What does being born during a solar eclipse mean for the baby?

As for your kid’s future, astrology says it’s crucial to safeguard your health if an eclipse falls within five days of your birthday. The reason? Eclipses will sometimes point out underlying weaknesses in health. Of course, the benefit is that you would have a chance to more quickly correct issues that would have otherwise gone unnoticed.

One thing I know for sure? Call it a full moon, solar eclipse, or alien invasion, parenting can be challenging and it's always easier when you have someone to lean on. It's written in the stars and on every mom's face. Promise.

This article was originally published on Aug. 18, 2017