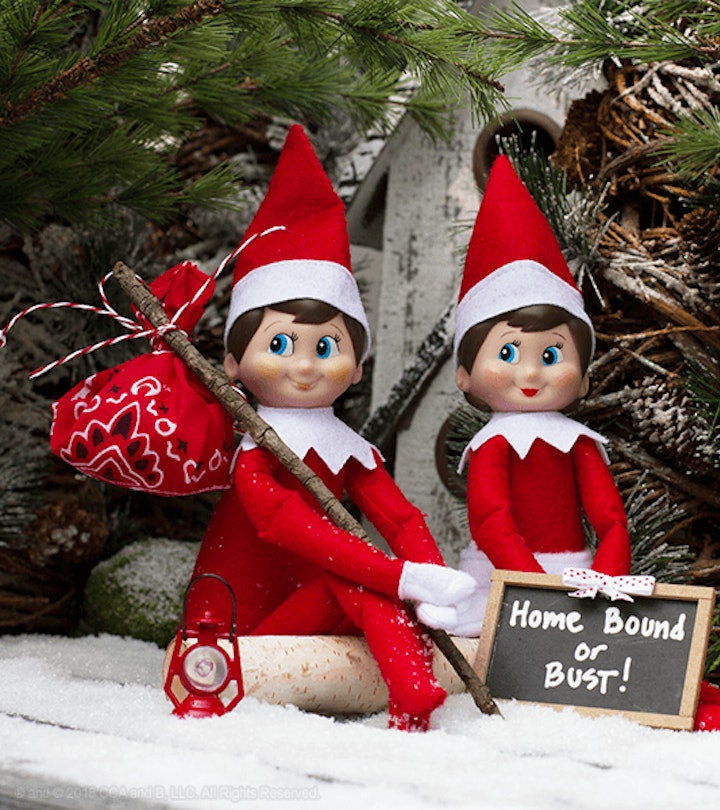 So you better start thinking up some good ideas now.

As the holidays quickly return, so does your family's beloved Elf on the Shelf. Yes, believe it or not, it’s time. But knowing exactly when Elf on the Shelf season starts is the first step to making magic happen. While there technically is a return period for Santa's helpers, the rules are, thankfully, a bit flexible.

Scout Elf Return Week runs from Nov. 23 to Dec. 2, giving a lot of parents the chance to have their scout elf come back to visit the night of Thanksgiving. This week is meant to be a celebration, as it's when "the first group of Santa’s Scout Elves [depart] the North Pole," per the official site for Elf on the Shelf. Your family's elf could be in this first wave of scouts to return, but if not, there's no need for your little ones to worry. As it turns out, some elves don't show up for duty until well into the second week of December, and there are a lot of very real reasons for this delay.

What if you missed Scout Elf Return Week?

If your kids are eagerly awaiting their elf's return (read: if you didn't get it together in time for them to appear by the start of December), assure them that their Scout will absolutely show up, but that they may be late due to "extended training" at the North Pole, or because they needed a little R&R after overindulging at Mrs. Claus' Sweet Shop. Your family's elf could also be delayed because they experienced a snowstorm resulting in poor travel conditions, they got distracted while sightseeing, or they had a special job they had to finish up for Santa in the North Pole before heading out for the holiday.

But if your elf has already reported for duty, then it's obviously a master at its craft so there was no need for Santa to hold it back (or mom made a special request for its early arrival for leverage to keep the kids "nice" — both are equally legitimate). Regardless of when your family Scout Elf appears, there's really no need to stress too much. And consider the silver lining: A delayed elf means you have that many fewer days to stress about what to do with the dang thing each morning.

More Like This
20 Of The Best Christmas Movies For Kids
20 Stocking Stuffers For Kids Under $20
101 Advent Calendar Activities, From Books To Read To Cookies To Bake
13 Brilliant Gifts For Kids Obsessed With Music — Especially Singing Very Loudly

This article was originally published on November 18, 2019